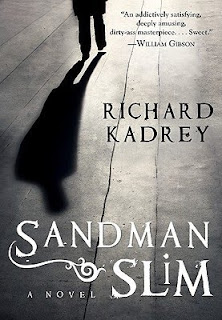 In the overcrowded urban fantasy/horror market these days, it's tough to get my attention. You've either got to be a proven commodity to me or hook me pretty quickly. Richard Kadrey does an excellent job of the latter in his latest novel "Sandman Slim" ($22.99, Eos).

James Stark has just returned to Los Angeles after spending 11 years in Hell ... quite literally. Before finding himself Downtown, Stark was a member of a circle of magic-users. Jealous of his power, the leader, a man named Mason, opened up a pit into Hell during one of their ceremonies and, with the help of some supernatural monsters, had Stark dragged there. Treated as a novelty by Lucifer and his generals -- the only living human to ever visit -- Stark was forced to fight in the arena against a bevy of vile creatures and was even recruited as an assassin in the demons' struggle for power. He's returned to Earth with plenty of new tricks, bent on revenge. In the process, though, he may just save the world.

At it's heart, "Sandman Slim" is a simple revenge tale in an urban fantasy setting -- a couple of things that are both quite overdone. But its hard to resist the hook of Kadrey's tale as, in the opening scene, Stark wakes up in a Dumpster with his clothes on fire and his strange story starts to slowly unfold. There are also a few nice little twists and turns to the story along the way, which I won't reveal here but are worth the journey.

Stark is the classic anti-hero. He's not a nice person, not someone who generally does the right thing just because it's the right thing. He's cold, callous and calculating, and everything is second to his plan for revenge. It's quite a challenge to take a character with those qualities and turn him into someone you want to cheer for, yet Kadrey manages to make it happen. He also surrounds Stark with a strange and fascinating cast of characters, ranging from a goth girls to mysterious wise men to an off-the-grid supernatural doctor with a secret to an angel that heads a government agency to fight Hell's minions on Earth.

"Sandman Slim" appears to be the set up for a new series of tales, and if Kadrey can keep them as interesting as this one, I'll look forward to continuing to read about Stark and Co.

Review: "The Child Thief" by Brom 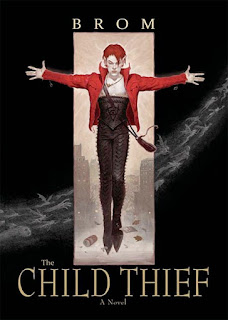 Fantasy artist Brom has long been known for bringing beautiful nightmares to life on book covers, but with "The Child Thief" ($26.99, Eos), he turns his attention to the pages between those covers.

The book retells the story of Peter Pan in a way that it hasn't been told before. Brom, whose full name is Gerald Brom, writes in the afterword of the book that he was inspired by a few phrases from J.M. Barrie's original tale -- not the sanitized Disney version -- that he found somewhat disturbing. He takes those ideas and runs with them to create a Peter Pan that is, at the same time, very true to the original character, yet completely different. The Peter here is cunning, brave, glib and often heroic, but he's far from the carefree lad that never wants to grow up. Instead, he's a tortured character, driven by his desire to save Avalon (his version of Never, Neverland) from the invading "flesh-eaters," led by The Captain (no Hook here), and haunted by the methods that battle requires.

The story begins with Nick, a New York City teenager who is on the run from the drug dealers that his mother has rented space to in their home. Tired of their torment of his family, he has stolen their stash of drugs, with the intent to sell them for the cash to run away. Now, they've caught up to him. But someone else is watching. When the dealers pounce, Peter is there to save the boy and quickly wins his trust, convincing Nick to come through the mists surrounding Avalon to the fort where Peter and his friends live. The promises sound good, but soon after entering the treacherous mist filled with ghosts and monsters, Nick realizes that those promises weren't quite true.

Nick is exactly the sort of child that Peter looks for and has been stealing from our world for centuries -- lost, abused children with nowhere to go and nothing to lose. He's given them a place where they feel they're wanted and they belong, turning them into his "Devils" to fight a war that started long before any of them were born.

As you might have already guessed from the name of Brom's Never Neverland, he mixes and matches mythologies to create this new version of Peter Pan. He draws heavily from the legends of King Arthur, as well as Celtic and Norse traditions and even European and American history for a fascinating and sometimes horrifying landscape. He also uses these legends to offer an interesting back-story for the boy who refuses to grow up that's a bit different from what you might expect.

"The Child Thief" is a book that often leaves the reader with mixed emotions. There's certainly no black and white here. While there are times when you want to cheer for Peter, there's also a bit of revulsion for his selfish and violent actions. Likewise, the "flesh eaters" are painted as the evil destroyers by Peter in the early going of the book, but we soon find out that there's much more to their story than he's sharing, including a bit of a gut punch near the end that I won't reveal here. The Captain, like Peter, is a study in shadow and light. He's an easy character to dislike -- brutal and ruthless -- but with qualities that are, at times, quite admirable.

It should go without saying at this point, but don't pick up this book to read with the kiddies. While it is based on a childhood favorite, this telling is for adults only. If you're looking for a family tale, you're much better off with the original or, perhaps, Peter David's "Tigerheart" if you're looking for a different take.

If, on the other hand, you don't mind a more disturbing vision of Peter Pan, Brom delivers a fascinating and entrancing version, trading paints for words to create a tale as dark, twisted and stunning as his artwork.