Review: "The Blade of Tyshalle" by Matthew Stover 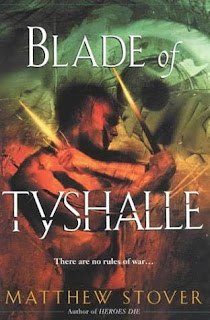 If you think reality TV is out of control now, you should see what happens a hundred years or so from now. In Matthew Stover's "Blade of Tyshalle" (Del Rey), the Studios of Earth use the ultimate form of reality TV to help keep the 14 billion people crammed onto the planet in line.

A worldwide outbreak of a new, highly contagious form of rabies known as HRVP leaves the world in chaos. Out of this chaos rises a new caste system, and the Studios are at the forefront.

With the discovery of Overworld - a fantasy world where magic works and fantastic races live - the Studios have their answer to keeping themselves at the top of the heap. Actors from Earth are trained and sent to Overworld to become heroes or die for the entertainment of the masses.

Hari Michaelson was born Labor - the lowest caste - and the only way out is to become an Actor. With a little help from fellow student Kris Hansen, Michaelson not only becomes an Actor, but the most famous Actor of all time - the legendary Caine.

But Caine's reign ends with a severed spinal cord in his final feature, "For Love of Pallas Ril." Without the use of his legs, he's just Hari Michaelson again, an Administrator for one of the Studios.

He has everything he fought for. He lives with his wife Shanna - the Overworld river goddess Pallas Ril - and their daughter Faith. Still he wallows in self-pity and longs to return to Overworld, to play Caine one more time.

Then Hansen - now Deliann, the changeling prince of the elves - sends a message through an Actor that Michaelson has been following closely. HRVP has broken out in Overworld. That sends Caine back into action as he scrambles to save the world he loves.

But he uncovers a much more sinister plot. He gets his wish to go back to Overworld, to play Caine again, but it comes with a heavy price. He has a decision to make, and the future of Overworld hangs in the balance.

"Blade of Tyshalle" is a grim tale of Earth's future, made only darker by the eerie similarities it bears to our own world.

It's unsettling how easy it is to picture our world turning into the barren, polluted, overpopulated Earth of Hari Michaelson's day.

Stover heightens this sense of despair with incredible descriptions of the surroundings that engage all the senses. These are, for the most part, not pleasant sensations. It's not the idealized world of most fantasy - far from it.

But Stover bucks the trends of the genre at every turn. His protagonist Caine was once the ideal fantasy hero, a dashing rogue with incredible fighting skills and a treasure trove of good one-liners.

The Caine that's called to action in "Blade of Tyshalle," however, is a middle aged administrator, wounded in both body and spirit. But the other Caine still lives inside him. He only needs something to bring it out.

For most of the book Stover dances a fine line between philosophical expositions by the characters and action/adventure sequences. At times he falls a little too far one way or the other, but overall he manages to keep a good balance. The book is frenzied and fast-paced, but there's also a lot of substance to the story. That's a balance that's difficult to achieve.

"Blade of Tyshalle" is actually the second book in a series that started with "Heroes Die," which tells the story of Caine's younger days.

I wasn't aware of that when I started the book, but I didn't need to be. Stover delivers up my idea of the perfect series novel - one that can be read and enjoyed without any prior knowledge of the world or characters.

He offers just enough background information so the new reader won't be lost, and the story itself is engaging and stands alone rather than just being a continuation of what happened in the first book.

This book isn't for those with faint hearts or weak stomachs. It's gritty, dark and violent, much like its protagonist.

The truly disturbing thing about "Blade of Tyshalle," though, may be what it says about our society and the path we're on.
Posted by Fred Phillips at 2:05 PM No comments:
Labels: Acts of Caine, Apocalypse, Book reviews, Fantasy, Matthew Stover, Post-Apocalyptic, Science Fiction
Newer Posts Older Posts Home
Subscribe to: Posts (Atom)