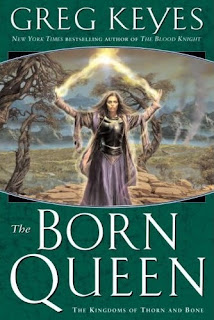 It’s refreshing these days when a fantasy author delivers what’s promised. In the era of bloated epic fantasy series that just keep going and going without resolution, Greg Keyes promised four books in his Kingdom of Thorn and Bone series, and he delivered four books that were tight, focused and fast-paced. Unfortunately, that’s also a weakness of this last book.

In the final volume of the series, “The Born Queen” ($26, Del Rey), the powers that have established themselves in the first three books are maneuvering to decide the fate of the world, and none of them look like particularly promising rulers. The most likely candidate is Anne Dare, descendant of the legendary Queen Virgenya Dare and current ruler of Crotheny, but she has a dark side emerging along with her growing power. The Sarnwood Witch has set a plan in motion to create a new Briar King to take the throne. The legendary despot the Black Jester has been reborn in a scholar. Overzealous church leader Hespero has declared holy war against Anne. The last of the Skasloi, who once enslaved humans, is hatching its own plans, and of course, Anne’s uncle, the undead murderer and usurper Robert Dare is still out there.

The action hits as soon as “The Born Queen” starts and doesn’t let up until the final page. If there’s a weakness to the book, it may be just that. At times, the story seemed to move a bit too fast. There were certain events and revelations in the book that needed a little more time and attention. While the major story arc was tied up neatly, there were some underlying storylines that perhaps got a bit short-changed.

I suppose it’s the nature of epic fantasy to grow beyond the scope of an easy wrap-up, and I got the feeling several times during this book that Keyes was rushing to finish it in the promised number of volumes. I applaud him for not allowing the series to grow out of control, but I also wouldn’t have minded a fifth book to allow him to flesh the ending out a little more and give more time to some of the secondary storylines.

Ultimately, “The Born Queen” adequately wraps the story up, and it’s a satisfying end to the series, though perhaps a bit less enjoyable than the first three volumes due to its rushed nature.

I'm coming in a few days late on this, but Carlin was one of my favorite comedians. Here's my favorite Carlin bit, on the differences between football and baseball, in his memory.

One year, come and gone

I had planned to have some sort of celebratory post about hitting the one year anniversary of rededicating this site. Unfortunately, my father passed away just days before the June 14 date when I made my first post on the relaunched site, and I didn't feel like celebrating very much. Still don't. But I figure I should recognize it in some way.

Since I launched a site in 1996, this is the longest I've probably kept one running on a regular basis. While it hasn't quite been what I envisioned -- some months I've packed it with content, some months have gone by with only a few posts -- it's still here, still more or less regularly updated and drawing better traffic than most sites I've had before. I find it fascinating to look at the places people are visiting the site from, and I'm continually amazed that the ramblings of this crazy guy in a hicktown draw attention from all corners of the globe.