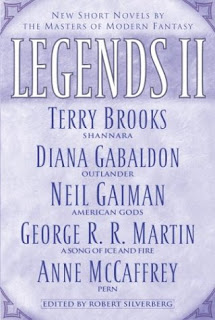 The first "Legends" collection, released in 1998, was a fantasy fiction fan's dream come true. It featured new short novels from 11 of the heavyweights of the genre, set in their signature worlds. It served as both a treat for long-time fans and a good introduction for the newbies - a way to test the waters before diving into a 700-1,000 page doorstop novel.

"Legends II" ($28.95, Del Rey) brings back a couple of the alumni of the first volume, while mixing in a few new writers, as well. Robert Silverberg is back as the editor, and also contributes a story from his world of Majipoor. Other returning authors include George R.R. Martin, Orson Scott Card, Tad Williams, Anne McCaffery and Raymond Feist. New to the collection are Robin Hobb, Diana Gabaldon, Elizabeth Haydon, Neil Gaiman and Terry Brooks.

As with the first book, the stories are a mixed bag, depending on your tastes in fantasy. Among the best stories are those by Martin, Gaiman and Williams. Martin continues the tale of the hedge knight Dunk that he began in the first "Legends" collection with "The Sworn Sword." Gaiman contributes a dark and atmospheric tale set in the world of his novel "American Gods" with "The Monarch of the Glen." Williams dips into his virtual reality "Otherland" world, and also takes a time to have a little fun and play around in Middle-Earth in "The Happiest Dead Boy in the World."

Some of the authors in the book truly fit the title. While they all have their fans and detractors, no matter which side of the fence you're on, you can't deny that names like McCaffery, Feist and Brooks are indeed legends in the fantasy field. If you like their previous work, you'll probably like these stories.

A few of the stories I found disappointing. Over the past several years Hobb has become one of my favorites in the fantasy genre, but her story "Homecoming," written as a series of journal entries, didn't really work for me. Though the approach is a unique idea, it kept me from really getting into the flow of the story. Likewise, Card, who is an outstanding writer, gives us another story in the world of Alvin Maker with "The Yazoo Queen," but I much prefer his Ender series. Being science fiction, Ender doesn't really fit into this collection, but I've never been a big fan of the Maker tales.

Unlike the first book, which contained 11 authors that I'd read before, I got my first look at a couple of writers in this book - Gabaldon and Haydon. I'll definitely be checking out more from them in the future. Gabaldon's characters in "Lord John and the Succubus" are among the more interesting I've read, and while it perhaps isn't a true fantasy tale, it definitely earns its spot in this collection.

Haydon's story, "Threshold," may be the best in the book. Set in her "Symphony of Ages" world, it's certainly the most sweeping and ambitious work in this collection. It takes readers on a journey they won't believe is possible in a mere 80 pages and leaves the reader wanting to dive right into one of Haydon's novels.

In the end, that's the best part of these collections. They give people the opportunity to sample some of the genre's biggest names and best writers in bite-sized chunks that are just enough, if you like the writer, to whet your appetite for more. Long live the "Legends" series.

Review: "Agents of Light and Darkness" by Simon R. Green 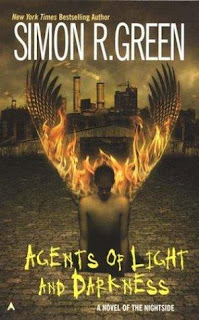 John Taylor finds things. If you're looking for something in the Nightside, the dark underbelly of London where it's always 3 a.m. and everything has a price, he's your guy. But in "Agents of Light and Darkness" ($6.50, Ace), Taylor finds himself out of his depth.

In this tale, Simon R. Green's detective finds himself inundated with offers he can't refuse. The Grail has come to the Nightside, but not the one you might expect. This is the Unholy Grail, the cup that Judas Iscariot drank from at the Last Supper.

With everyone from sorcerers to Howard Hughes - who didn't really die, but rather "moved to another plane for tax purposes" - seeking Taylor's services in the matter, he settles on a seemingly friendly priest named Jude who carries a hefty purse and claims to represent the Vatican.

Though Taylor is the best at what he does, this case proves more challenging when the angels arrive in the Nightside, and it may land him in some serious trouble that even his fearsome reputation can't get him out of.

In Green's second book about John Taylor, he builds on the detective's legend nicely. Taylor, though faced with a dire immediate situation, remains focused on finding out about his mother. She's the reason Taylor has his mysterious rep and a secret that everyone in the Nightside seems to know. But everyone also seems scared to share that secret with him.

Green's Nightside has one of the most colorful casts you'll find this side of Terry Pratchett. From his sidekick Shotgun Suzie, a female Rambo who takes her fashion cues from Emma Peel, to the Bedlam Boys, a washed-up boy band with the psychic powers to terrorize innocent bystanders (hmm … imagine that), the characters are almost as entertaining as the story itself.

That story follows a fairly basic private eye novel arc, provided that your favorite private eye has to deal with vampires, wizards and the occasional angry angel, of course. Taylor is a likeable character, a must in the world of private eye novels, and it's easy to root for him.

The result is a quick, light and fun novel that will eat up a couple of hours and leave you ready for another trip to the Nightside. 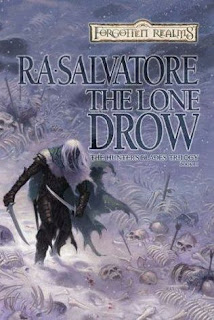 If my count is correct, "The Lone Drow" is R.A. Salvatore's 17th book about the dark elf Drizzt Do'Urden, and it brings the unlikely hero full circle, to where his journey began.

For the first time in a long time, Drizzt is well and truly alone. He thinks his friends have been lost in a battle with a group of orcs that someone has somehow forged into a formidable army. The only thing that's left to him is vengeance.

Gone is the friend, mentor and confidante that Drizzt has become over the years. He's been replaced by the hunter - a cold, unfeeling and methodical side of the dark elf that we've rarely seen since he stalked the Underdark in Salvatore's "Dark Elf" trilogy.

As Drizzt wreaks havoc among the orc armies, his friends Cattie-Brie and Wulfgar are very much alive. (These books are a bit like a comic in that Salvatore does seem to have a problem killing his heroes, and even when it happens, they find a way to come back.)

While Bruenor lays grievously wounded, they attempt to hold Mithral Hall against the bulk of the orc army. Unlike Drizzt, Catti-Brie and Wulfgar are confident their friend is still alive, but they have bigger problems at hand.

After losing his way somewhere in the middle of this series, Salvatore has rebounded with the last few installments. He's made an attempt to take the series back to its roots, and for the most part, it's been pretty successful. The reunion of the original group in "Sea of Swords" and the rousing adventure of "The Thousand Orcs," definitely rekindled my waning interest in Drizzt's story.

I've got mixed feelings on "The Lone Drow." While I enjoyed seeing the hunter emerge again, it lacks the story depth and emotion that was present the last time we saw him, in the "Dark Elf" trilogy. This book is pretty much a "smash 'em and bash 'em" adventure tale. Of course, there's nothing wrong with that. It's still quite enjoyable, particularly for fans of Salvatore's past work.

I still think Salvatore needs to shake up the world of his drow hero a little more to bring some excitement back into the storyline, and I do think he needs another well-developed and credible arch-enemy, a la Artemis Entreri, instead of the creep-of-the-week approach.

But "The Lone Drow" does reaffirm Salvatore's knack for breathless adventure and leaves me with high hopes for the conclusion of the storyline in "The Two Swords," due out this fall. Just a few years ago, I said Salvatore should retire Drizzt, but now I think there just may be some life left in the dark elf after all.