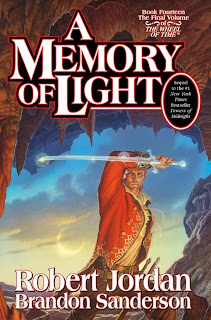 It was a disappointing year for me as far as reading goes. Not because of the quality of the books, mind you, but simply because I had very little time to read, especially later in the year. There are still a number of books – including *gasp* a new book from Neil Gaiman – that I haven’t gotten around to, and I’ve only managed to read about five books in the last six months. That has to be a lifelong low for a guy that’s used to reading at least 40 a year, and it makes me want to cry. Here’s to fixing that problem in the coming year.

That said, I still read some pretty good books this year, so here’s the list. As a reminder, this is in no way a “best of 2013” list (they're not all even from 2013). Even in a good year, I don’t manage to read enough books to even remotely think I’m qualified to name the “best.” These are just my favorite reads of the last year (in alphabetical order by author, not order of preference).
Read more »
Posted by Fred Phillips at 7:18 PM 2 comments:
Labels: Anthony Ryan, Brandon Sanderson, Charlaine Harris, Diana Rowland, Joe Hill, Kevin Hearne, Mark Lawrence, Random rants, Rick Yancey, Robert Jordan, Scott Lynch, Stephen King, Stina Leicht, Suzanne Collins

Review: "The Republic of Thieves" by Scott Lynch 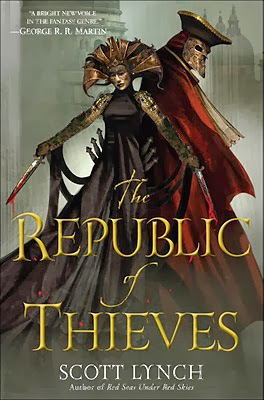 We waited quite a while for Scott Lynch's "The Republic of Thieves" ($28, Del Rey), but the wait was definitely worth it.
After being blown away by Lynch's debut novel, "The Lies of Locke Lamora," I was a bit disappointed in the follow-up, "Red Seas Under Red Skies," but the third installment in the tales of Locke Lamora is the equal of the debut.
As the story opens, Locke lies on his deathbed, having been poisoned while his loyal friend Jean Tannen makes ever attempt to save him. Jean has brought a string of physicians and charlatans through the door in a desperate attempt to cure his friend, but they've all delivered the same news -- Locke is going to die.
It's just a matter of days, or possibly even hours, when salvation comes from a very unlikely source -- the Bondsmagi of Karthain. Jean and Locke are visited by Archedama Patience, who tells them she can remove the poison from Locke's body in return for their service. Locke is understandably reluctant considering his past experience with the Bondsmagi, but Jean convinces him he has nothing to lose.