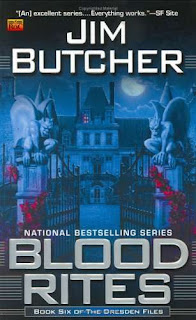 Chicago's only wizard-for-hire, Harry Dresden is back, and not surprisingly, he's in hot water again in "Blood Rites" ($6.99, Roc), the latest in Jim Butcher's "Dresden Files" series.

Harry's trying to make a living while laying low. The vampire courts still have a price on his head. Then he gets a job offer from an interesting source. Thomas, a white court vampire that Harry has worked with in the past, asks him to take on the job of finding out who has put on entropy curse on his producer friend Arturo Genosa. Of course, Harry gets more than he bargained for when Genosa turns out to be an "adult" movie director with three ex-wives who were stars in his movies.

Harry soon finds out that the plot is thicker than a couple of spurned exes, and he finds himself in the last place he wants to be - in the middle of vampire politics.

"Blood Rites" is the sixth installment of the "Dresden Files," and though a number of very good authors have tried the ghosts and ghouls in the real world formula, Butcher's is the only series that's been able to keep me consistently entertained through this many books. It's due in part to the focus on action and humor and his avoidance of the overwrought emotional introspection that comes along with most of these tales.

Though Harry Dresden is certainly a prime candidate for that kind of over-the-top tortured hero treatment, Butcher bypasses the wallowing-in-misery thought sequences and keeps the story moving. He packs so much in that I often wonder if he'll run out of story line possibilities soon. I hope not because thus far, the Dresden books have been incredibly entertaining.

If you haven't read the past tales in the series, though, "Blood Rites" is probably not the place to start. Most of the characters in the book have been introduced before and have backstories with Harry that are alluded to, but not addressed directly here. You might find yourself a little lost, and you'll certainly miss some of the references to previous stories.

Butcher also does a good job of setting up future installments of the series, dropping a few possibilities into the mix with a stowaway puppy from a supernatural rescue mission and a revelation about Harry's past. Here's to the continuing adventures of Chicago's premier wizard.