Review: "The Long Earth" by Terry Pratchett and Stephen Baxter 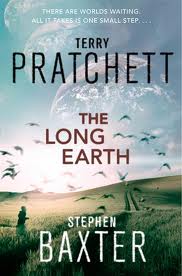 In the hours since I finished “The Long Earth” ($25.99, Harper) by Terry Pratchett and Stephen Baxter, I’ve struggled a little with how to approach the review. My love of most things Pratchett is no secret, but this is my first encounter with Baxter since I’m not a big science fiction reader. While I, in general, enjoyed the book, I didn’t walk away from it feeling really satisfied.

The premise is that there are many Earths, in various states of development and evolution, layered on top of our Earth, sort of like different dimensions. None of them seem to have humans – though there are some humanoid species out there – and many of them have moved along different evolutionary paths. Over the course of history, people have “stepped” into these worlds by accident, but it’s not until the day known as Step Day that it becomes a widespread phenomenon.