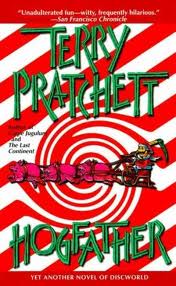 It's too bad that I couldn't get this review up before Christmas, or Hogswatch to Discworld fans. It's the kind of book that can help put you in a lighter mood during the holiday season, but I think you can enjoy it just as much after the holidays are over.

Everyone who's familiar with the Discworld is familiar with its anthropomorphic personifications, particularly its most (or least) popular one - Death. In this novel, the Hogfather has gone missing, and if Death doesn't fill in, delivering gifts to children all over the world, "the sun will not rise".

Throw in Death's granddaughter, Susan, the Oh God of Hangovers, the Cheerful Fairy, and an assassin named Mr. Teatime (that's Teah-tim-eh), who has been hired by a group known as the Auditors to kill the Hogfather, and you have a wickedly funny tale as only Pratchett can tell it.

I have to say that I've been a little disappointed with some of Pratchett's more recent efforts, compared with his early works, but this book had me in tears I laughed so hard. It's not his best, but it's definitely a worthy addition to the Discworld collection.

It's truly a shame that us fans in the US have to wait so long for Pratchett's books. This volume has been out in Europe for quite some time. Fortunately, though, he continues to make them worth the wait.

Review: "Heir to the Shadows" by Anne Bishop 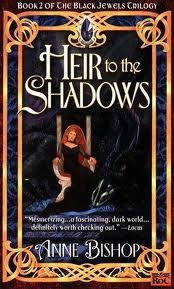 I read the first book in this series, "Daughter of the Blood," back in 1998, and it was one of my favorite books of that year. This book continues the story well and is an enjoyable read, but in my opinion it just doesn't stack up with the first one.

The problems with this book are not overwhelming. The main thing is that Bishop seems to have tried to cover too much ground too quickly. Despite its 482 pages, it seemed to me that I sprinted through the entire book, never taking any time to admire the story.

There were several moments in the book that I felt could have made for some fantastic drama. If I had to put my finger on one thing this book was short on, it was tension. Bishop seems to be tightly focused on the plot to the detriment of other areas of the story. Whenever a scene came along that could have been tense and edgy, she seemed to glaze over it to get to the next step in the plot.
Read more »
Posted by Fred Phillips at 9:50 PM No comments:
Labels: Anne Bishop, Black Jewels, Book reviews, Fantasy, Horror, Magic, Witches
Newer Posts Older Posts Home
Subscribe to: Posts (Atom)