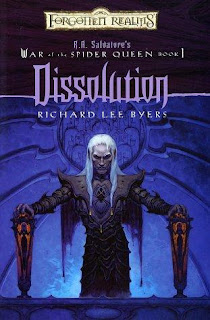 Though he didn't do any of the actual writing, R.A. Salvatore's stamp is all over the latest Forgotten Realms series, "The War of the Spider Queen."

The first volume, "Dissolution" by Richard Lee Byers ($24.95, Wizards of the Coast), casts the shadowy world of the drow into chaos.

Lolth, the goddess of the dark elves, has seemingly abandoned the underground city of Menzoberranzan. Large numbers of the normally subservient male drow have gone missing, and power struggles between the key figures of the city threaten to tear it apart.

While some seek to bring the Spider Queen's power back to Menzoberranzan, others look to use her absence to their advantage.

It's appropriate that Salvatore is involved in this project, since he's the one that introduced readers to the treacherous world of the drow through books about his popular hero Drizzt Do'Urden. But Salvatore himself was reluctant to take a role in the series.

"I was surprised when they called me, and I resisted to my last breath," Salvatore said in a recent interview with The News-Star.

The project is driven more by the dark elves' deities than the characters that Salvatore prefers to focus on. But he said the project has been much more fun than he expected, and with other authors taking on the main writing duties, his role is a relatively easy one.

If the first volume is any indication, he's done a fantastic job.

Byars' handling of the dark elves echoes Salvatore's own in many ways. That's not to say that Byars doesn't put his own stamp on the project.

While Salvatore prefers to focus on character interactions, Byers' style is driven by plot. Readers won't find many introspective moments in "Dissolution." But what his characters may lack in depth, Byers more than makes up for in sheer action. The book's pace is fast and furious, with the characters being thrown from one dangerous situation to another.

The styles of Byers and Salvatore do intersect in one area, though. Byers' combat scenes are vivid and highly stylized. They're an added bonus for fans of past tales of the drow.

Writing about the drow - an essentially evil society - is a difficult task in itself. It's hard to create sympathy or understanding for a character that's just as likely to use a friend's misfortune to his own advantage as to help out. Byars handles the quandary well, though. While the reader can't really get fully behind the characters, each one has moments that earn at least a bit of sympathy.

All in all, "Dissolution" serves its purpose well. It's a fast and fun read that sets up an intriguing larger story. It will be interesting to see how the other authors build on it.