Review: "The Thief Who Pulled on Trouble's Braids" by Michael McClung 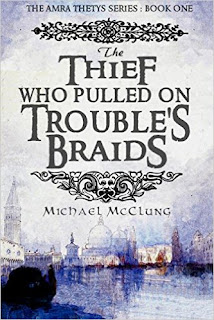 Even though the event officially ended this weekend, I’m still continuing my journey through the finalists in Mark Lawrence’s Self-Published Fantasy Blog Off. So far I’m 1-for-1, having really liked David Benem’s “What Remains of Heroes” and having an enjoyable, but ultimately unsatisfying experience with Matthew Colville’s “Priest.”

As luck would have it, I started reading Michael McClung’s “The Thief Who Pulled on Trouble’s Braids” last week, and it was just named the winner of the contest on Saturday. The book received an average score of 8/10 from the 10 participating blogs with a high score of 9 and a low of 6.5.

As far as I’m concerned, “The Thief Who Pulled on Trouble’s Braids” represents exactly what the Self-Published Fantasy Blog Off was created to discover – self-published fantasy novels that are every bit as good as anything coming from the big publishing houses. 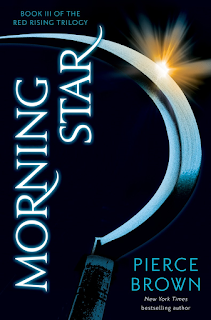 I don’t know that there’s been a book in years that I anticipated more than Pierce Brown’s “Morning Star” ($27, Del Rey).

I thought the first book in the trilogy, “Red Rising” was outstanding, but the second book “Golden Son,” completely blew me away. I read “Golden Son” in January of last year and knew at that point that it would be my favorite book of the year. It was, pretty easily.

Now Brown returns to the story of Darrow of Lykos at a low point. The former Red miner who rose to the top of the Gold ranks in an effort to overthrow an oppressive caste system is imprisoned in darkness. His execution was broadcast across the Society and most people believe him dead. But the execution was faked, and his greatest enemy, Adrius au Augustus, also known as the Jackal, holds him chained and tortured. The once-powerful Reaper of Mars’ body is now ravaged and weak.

Darrow believes he’ll never see the light again, but then the Sovereign, Octavia au Lune, sends two of her Olympic Knights to retrieve him from the Jackal. That provides an opening for the Sons of Ares to stage a daring rescue attempt that puts the Reaper back at the forefront of the revolution. But the game has changed dramatically while he’s been imprisoned, and it will take more than his fearsome reputation to put the pieces back together.
Read more »
Posted by Fred Phillips at 2:41 PM No comments:
Labels: Book reviews, Pierce Brown, Post-Apocalyptic, Red Rising Trilogy, Science Fiction 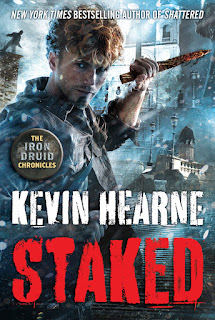 In “Staked” ($27, Del Rey), Kevin Hearne proves that his three druid protagonists are better when they’re together.

Coming on the heels of the somewhat disappointing “Shattered,” “Staked” follows much the same path. Atticus, Granuaile and Owen are separated, each running their own storyline. Atticus ramps up his war on the vampires, as he goes after Theophilis, the oldest of the monsters. Granuaile visits Asgard to have Loki’s mark removed and find a way to shield herself from the sight of the Trickster god. Owen settles in with his adopted pack of werewolves and begins to consider training a new generation of druids.