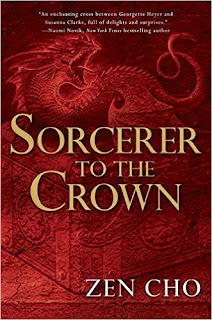 The problem becomes amplified when Stephen dies mysteriously, and Zacharias inherits the staff of Royal Sorcerer. Though those in the magical community can’t deny that the staff chose Zacharias, they can certainly doubt his abilities and leadership. He’s blamed for the declining amount of magic in England, even though the problem has existed for years before he assumed the role, and some of his rivals even whisper that he murdered his adopted father and mentor to obtain the staff.
Read more »
Posted by Fred Phillips at 12:08 PM No comments:
Labels: Book reviews, Fae, Fantasy, Magic, Zen Cho

Review: "Alice Cooper, Volume I: Welcome to My Nightmare" 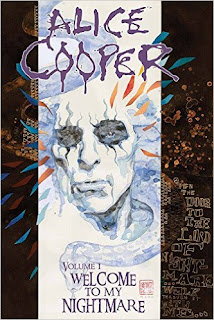 Though I was at one time an avid comic collector and reader, and I’m a lifelong fan of hard rock and metal, I had never read the Alice Cooper comic series. Recently, a co-worker, knowing my proclivities for both comics and rock, gifted me with “Alice Cooper, Volume I: Welcome to my Nightmare” ($24.99, Dynamite).

The first thing that struck me about this collection was that it was a gorgeous presentation. The hardcover collects the first six issues of the Dynamite Alice Cooper comic, along with a bonus featuring Alice’s first comics appearance with Marvel in the 1970s.

The story arc of the newer comics features Alice as the Lord of Nightmares. Trapped in a bad contract by a trio of devilish agents known as Clan Black, he has fallen into obscurity. That is, until a young man who is being bullied discovers Alice’s music and accidentally summons him from the Nightmare Place for help, freeing him from his contract with Lucius Black, but opening Alice and the young man, Robbie, up to danger from the other two members of the clan.
Read more »
Posted by Fred Phillips at 10:45 AM No comments:
Labels: Alice Cooper, Book reviews, Comics, Demons, Dynamite, Horror, Marvel 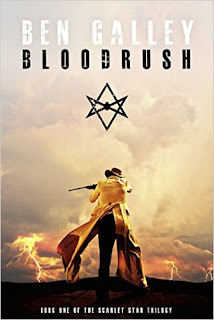 If it’s accomplished nothing else, Mark Lawrence’s Self Published Fantasy Blog Off has certainly gone a long way toward changing the way that I view self-published books. I used to have a strong rule against accepting them, along with a snarky comment in my submission guidelines (Trust me, it was for good reason). But as I make my way through the finalists of the competition, I’m finding some truly deserving books. The latest being Ben Galley’s “Bloodrush,” which finished second with an overall 7.75 out of 10.

I truly think that the Old West milieu is underused in fantasy. I’m a sucker for a good old-fashioned, hard-nosed gunslinger protagonist – Stephen King’s Roland Deschain, David Gemmell’s Jon Shannow. There just aren’t enough of them.

So, the setting and cowboy cover of “Bloodrush” alone were enough to get me interested, but Galley delivers so much more. 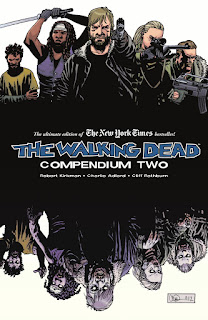 It took me a while to get through “The Walking Dead: Compendium Two” ($59.99, Image Comics) because I put it on pause for a while, debating whether I wanted to go beyond what I’d seen on the television version.

As I mentioned in my review of the first volume, reading through this is something of a different experience for me. Usually, I’m very familiar with the literary basis before I watch the film adaptation, but my introduction to The Walking Dead came via the AMC show.

Adding to that is the fact that I haven’t had cable in a number of years, so I’m running a season behind everyone else on the TV show. So I stopped at the pivotal moment in Alexandria that ended the last season. Ultimately, I decided to push on, and I’m glad I did because some of my friends who are current with the TV show would have spoiled a big plot point for me if I hadn’t.
Read more »
Posted by Fred Phillips at 11:35 AM No comments:
Labels: Book reviews, Comics, Horror, Robert Kirkman, The Walking Dead, Zombies
Newer Posts Older Posts Home
Subscribe to: Posts (Atom)