Review: "One Knight Only" by Peter David 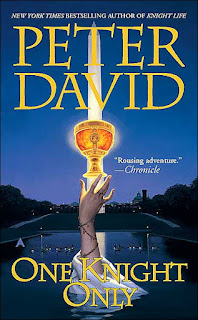 The return of King Arthur takes a dark turn in Peter David's latest novel "One Knight Only" ($23.95, Ace).

In his last Arthurian novel "Knight Life," David introduced us to Arthur Penn, the man once known as King Arthur, returned to our world in a time of need. In that book, Arthur was a plainspoken man who was steered into politics by his adviser Merlin and became mayor of New York.

Now, Arthur Penn is the president of the United States. But today's world isn't Camelot, and his presidency is a far cry from a happy one. Merlin has been taken from him, and his most loyal knight Percival has been given a position that requires him to be away from Arthur. (He is, after all, a questing knight at heart.)

A terrorist named Arnim Sandoval strikes from hiding in the country of Trans-Sabal. Two previous presidents have failed to capture or kill Sandoval, but Arthur vows to continue the fight despite the urgings of his advisers. But when Sandoval strikes close to home with an assassination attempt that puts his beloved Queen Gwen in danger, things change. Now, it gets personal.

I'm not really sure what to think of David's latest novel. "Knight Life" was a light-hearted book that poked fun at today's politics. "One Knight Only" has a much darker and more somber tone. While there are still a few laughs in the book, much of the humor is drained by the ominous events that may strike too close to home for some people.

"One Knight Only" is the second fantasy/science fiction novel I've read recently that used the events of Sept. 11 (or a thinly veiled version of them) as a central focus, and I'm not really sure how I feel about that. On one hand, fantasy has always been a bit of an escape to another world; on the other, both of the books were good ones.

Much as in "Knight Life," David uses his fictional tale as a vehicle to discuss current issues without beating his readers over the head with them. He offers some interesting takes on the current political situation, but manages to walk the line and never cross over into telling his readers what they should think.

The character of Arthur is engaging, though admittedly some of the other characters are a little more like window dressing. The book also has the usual cast of historic and mythological walk-ons, including an appearance by Gilgamesh. (Yes, that Gilgamesh.) Those add great fun to the story.

Despite the turn in tone between this book and the last, it's still a good read. In these two books, David has offered up one of the most intriguing and interesting takes on the Arthurian legends yet.
Posted by Fred Phillips at 6:14 PM No comments:
Labels: Book reviews, Fantasy, King Arthur, Peter David, Urban Fantasy 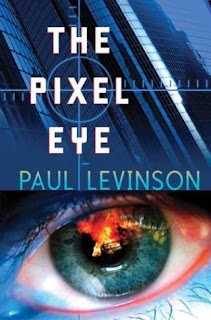 The book is part of a series featuring Levinson's near-future NYPD forensic scientist Phil D'Amato. He serves in a world that is running scared from terrorism, and almost anything is suspicious. (Sound familiar, yet?)

D'Amato is called upon to investigate the disappearance and reappearance of squirrels around the city. He thinks it's a joke, until he uncovers secret research using hard-wired rats as spies. That puts questions in D'Amato's mind. Could the missing squirrels be part of a terrorist plot?

That question sends D'Amato spinning in a web of intrigue as he gets tangled up in a top secret Homeland Security project which may or may not give him his answer.

While science fiction usually deals with far-flung worlds, times and ideas, Levinson decides to take the genre in another direction. Though I haven't read the previous volumes in the Phil D'Amato series, "The Pixel Eye" is a very timely tale that reflects a lot of the things going on in today's world and a lot of the same issues that Americans are grappling with every single day.

As D'Amato is pulled further into the plots of the government, he's forced to confront the issue of freedom vs. security. It's one that's on a lot of people's minds these days.

The problem for Levinson may be that the subject matter outweighs the story. While in most detective-style mystery novels, the main attraction is the lead character, I don't really remember much about D'Amato. I do remember the thoughts the storyline sparked in my mind. That alone, makes it a book worth reading.

"The Pixel Eye," much like Orwell's "1984" and Bradbury's "Fahrenheit 451," presents a chilling vision of the future that hits way too close to home for comfort. Levinson's book is not quite as heavy as those two venerable volumes, but it touches on some of the same themes. It's not a book for escape from the problems of today's world, but rather one that will make you face them.

Though there are those readers who dismiss science fiction as escapist and less important than other literary works, books like "The Pixel Eye" defy that perception of the genre. Levinson's latest is a thought-provoking book that should be on anyone's reading list.
Posted by Fred Phillips at 6:17 PM No comments:
Labels: Book reviews, Detective, Paul Levinson, Science Fiction 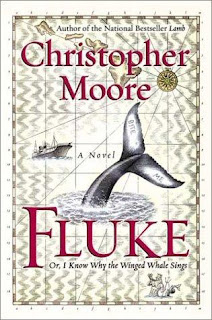 I came late to the humor of Christopher Moore. I'd never heard of him when I picked up his last book "Lamb," and all I can say is better late than never.

"Lamb" was easily the funniest book I've read in years. It left me lying on the floor with tears of laughter in my eyes. So I was eager for Moore's latest, "Fluke: Or, I Know Why the Winged Whale Sing" ($23.95, William Morrow).

Nathan Quinn is a biologist working out of Hawaii who is completely obsessed with discovering the reason that humpback whales sing. He's been in pursuit of that holy grail of science for years, but this season, things are about to change.

First, his crew gets two new members - a flirtatious assistant named Amy who isn't really what she seems and a wanna-be Rastafarian surfer-dude named Kona who is actually a middle-class white kid from New Jersey. Along with the salty photographer Clay, they make an odd science team, but then, this is odd science.

Nate's obsession deepens when he spots a whale with strange fluke markings. Though he's reluctant to tell anyone, he could swear the whale's tail had writing on it - the words "Bite Me." His search, and Kona's unwitting aid, bring him closer than ever to discovering the true message in the whale song, but there are forces in the sea that don't want him to find it. He's about to meet them face to face.

"Fluke" is not as laugh-out-loud funny as "Lamb," but it's a whole lot weirder. The story requires some serious suspension of disbelief, but if you can do that, it's great fun.

As with "Lamb," Moore's characters in "Fluke" are colorful and interesting. You want to continue reading the book just to get to know them a little better and figure out what makes them tick.

In addition to the light-hearted nature of the story, there's also some good information about whales and whale research. Moore doesn't beat readers over the head with it in the story, but dedicates serious space at the end of the book to the real issues.

Though not quite as strong as "Lamb," "Fluke" still provided me with plenty of chuckles and a few good belly laughs. I've been converted. I'll be reading Moore from now on.