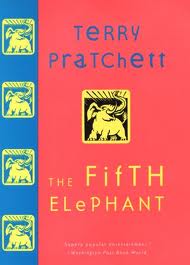 The dwarves are about to choose a new Low King, and Lord Vetinari needs to send a diplomatic envoy for this very delicate occasion. Who does he choose? Sam Vimes, of course. Likely the most undiplomatic member of the city watch (with the exception of Detritus, of course.)

So with his lady wife, a monstrous troll (Detritus), an assassin with the mannerisms of Billy Bob Thornton's character from "Slingblade" and a dwarf who wants to show her feminine side in tow, Vimes dons a pair of ruby red dress tights and crosses the countryside. Of course, where Vimes goes, crime is usually close behind.

Just when I was beginning to doubt that Pratchett would ever make me roll with laughter again, he unleashes "The Fifth Elephant." After a number of mediocre works, it's nice to have a truly funny book from Pratchett again.

After the disappointment of "Jingo," the last city watch novel, Pratchett returns to Vimes and Co. with a vengeance. Behind the primary plotline of Vimes' diplomatic mission is another with Carrot and Gaspode the talking dog chasing the werewolf Angua on Vimes' heels. Not to mention the havoc that Fred Colon, having been left in charge of the watch in Vimes' absence, is wreaking in Ankh-Morpork. It all comes together into one of the best books Pratchett has given us in years.

Still even as good as this book is, it doesn't match up with his early Discworld novels. I have to wonder if maybe it's not time to find some other characters to focus on. I've noticed that when Pratchett picks a character, whether it be Rincewind, Death, the witches or the city watch, the first few books he does about them are fantastic, then they begin to taper off. I think the introduction of some new elements into "The Fifth Elephant" is really what brought the spark back.

That thought aside, there's not much negative I can say about this book. The only thing I didn't like about it was the horrid hot pink and turquoise cover that American publisher HarperPrism put on it. Why they have to change the covers from the UK version I don't know. But if they absolutely have to, why hot pink and turquoise? Yick.

If you're new to the Discworld, I still recommend you check out the earlier novels first. But, if you're like me and have had a waning interest in Pratchett's novels, give this one a shot. You won't be disappointed.