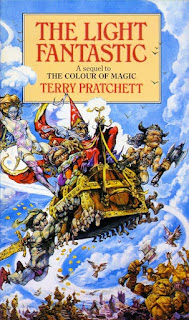 Continuing my return journey through the Discworld, I find Terry Pratchett getting more in his groove with “The Light Fantastic” ($9.99, Harper).

Rincewind and Twoflower continue the wild journey that began in “The Colour of Magic” as the world begins to go crazy. A huge giant start has appeared in the night sky, and it’s getting closer as Great A’Tuin swims through space toward it. Cults pop up, magic falls out of favor, and many people think it’s the end of the disc.

Meanwhile, an ambitious wizard at Unseen University has set his sights on moving up in the world. To do that, he needs the lost spell from the Octavo, the most powerful magical book on the disc. That spell just happens to be lodged in Rincewind’s head, and the easiest way to get it is to kill him.

On revisiting the “Colour of Magic” after 20 years or so, I still thoroughly enjoyed it, but I found it to be maybe a bit weaker than I remembered. It was kind of a wandering piece, with a few subplots that didn’t really seem to go anywhere. “The Light Fantastic,” though, seemed to me to be where Pratchett really starts hitting his stride. It’s a bit tighter and maybe a little funnier.
Read more »
Posted by Fred Phillips at 11:26 AM No comments:
Labels: Book reviews, Comedy, Discworld, Magic, Memory Lane, Terry Pratchett

Review: "The Gospel of Loki" by Joanne Harris 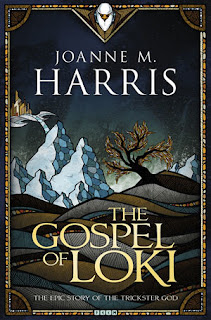 I enjoyed Joanne Harris’ first Norse mythology-themed young adult novel “Runemarks” a number of years ago, so, for the title alone, I couldn’t resist her latest “The Gospel of Loki” ($25.99, Saga Press).

The approach has become pretty common in recent years – take a classic tale and turn it around from the villain’s viewpoint. For this book, Harris turns some familiar tales from Norse mythology on their head, as we get the view through the eyes of the trickster god Loki.

From the very beginning of his relationship with Odin, Loki is an outcast in Asgard. He’s not a true god, and the others make sure he knows it. They are, however, eager to use his talents when he can help them. His perception of his treatment causes resentment that will eventually put the worlds on the path to Ragnarok.
Read more »
Posted by Fred Phillips at 5:20 PM No comments:
Labels: Book reviews, Fantasy, Joanne Harris, Magic, Norse mythology
Newer Posts Older Posts Home
Subscribe to: Posts (Atom)