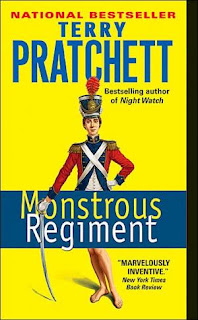 The current world situation seems to be permeating every part of our culture. In "Monstrous Regiment" ($24.95, HarperCollins), it's even found it's way into Terry Pratchett's Discworld.

Polly, the daughter of a tavern owner, disguises herself as a boy to join the Borogravian army and travel to the front to find her brother, who is missing in action. The Borogravians seem to be at war with everyone, largely due to their leader the Duchess (who hasn't been seen in years) and their god Nuggan, who seems to create new abominations daily. Among the things that are abominations unto Nuggan: images (except of the Duchess, of course), basically anything involving women, rocks and the color blue.

Polly, with a short haircut and a strategically-placed pair of socks, joins a ragtag group of recruits that includes a troll, a teetotaler vampire and an Igor - always an entertaining part of a Discworld story. Sergeant Jackrum takes in the pitiful lot because they're the best - and the last - available because, of course, Borogravia is winning. That's what everyone says.

As the group gets closer and closer to going to war, Polly discovers that a vampire and an Igor aren't the biggest oddities in this group. She's not alone in her disguise - not by a long shot.

"Monstrous Regiment" is not as howlingly funny as many of Pratchett's "Discworld" novels. Instead, it takes more of a satirical turn. While the book still has its laugh-out-loud moments, most of the humor here comes from Pratchett's wry take on more serious subjects. Pratchett uses the book to take a look at women's issues in our society and poke fun at fundamental extremists of all stripes. It's also a very timely novel, as some events seem to parallel those in our own world.

Hardcore Pratchett fans may be disappointed that the book doesn't focus on familiar characters, but as always, many of them put in an appearance, specifically Samuel Vimes, who comes to investigate the destruction of Ankh-Morpork's clacks towers in Borogravia after Nuggan declares them an abomination.

To me, the infusion of fresh blood in the book is refreshing. Though they're all fascinating characters, how many stories can you really tell about Vimes, Rincewind and Granny Weatherwax before they get stale?

It's a slightly different approach for Pratchett. Though his books have always had an element of satire, this is the first time he's used it as a primary element. It works well - even if it is an abomination unto Nuggan.