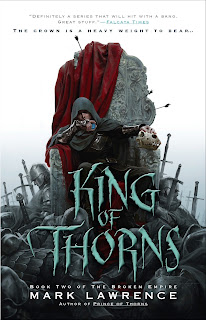 Jorg of Ancrath doesn’t seem quite himself at the start of “King of Thorns” ($25.95, Ace), the second installment of Mark Lawrence’s Broken Empire trilogy.

For one thing, it takes a little while for someone to die brutally at his hands. There’s good reason for the change. Ah, but you’ll have to read it yourself to discover the secret of the little copper box, or rather, the secrets it holds.

The main action of “King of Thorns” takes place several years after “Prince of Thorns.” Jorg has secured his kingdom, and a little bit of the restlessness and ruthlessness that led him to that conquest seems to have worn off. For four years or so, he’s seemed content to have and run his little demesne. Now, though, the Prince of Arrow and his massive army are knocking on Jorg’s door. Most people believe that Arrow is the man to unite all of the broken kingdoms as emperor. They believe that he’ll be a good and just emperor, with the good of the people at heart. In truth, even Jorg believes that, but he wouldn’t be Jorg if he let a little thing like that stand in the way of his ambitions.
Read more »
Posted by Fred Phillips at 9:24 PM No comments:
Labels: Book reviews, Broken Empire, Fantasy, Magic, Mark Lawrence, Post-Apocalyptic 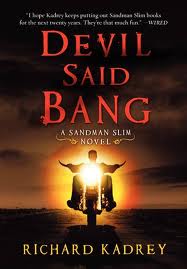 Being Lucifer, though, isn’t all it’s cracked up to be. In fact, it’s like being the boss of a lot of things. Stark finds himself dealing with budget meetings and the daily minutiae of keeping things running. Though he has Lucifer’s magical armor that protects him from most attacks, he hasn’t come into the full power of his position yet, and splits his time looking for the secrets of Samael’s power and plotting his escape.

What he really wants is to go home. He wants to see his girlfriend Candy again, and he wants to return to his normal life on Earth now that his vendetta against long-time rival Mason is settled. But Hell needs a ruler.

Review: "Two Ravens and One Crow," by Kevin Hearne 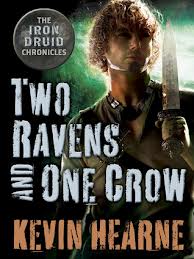 My biggest complaint with this tale is that there isn’t enough of it.

“Two Ravens and One Crow” ($2.99, Del Rey) is a digital short in Kevin Hearne’s Iron Druid Chronicles, which sets up the forthcoming novel “Trapped,” due in November. At just over 50 pages, I’m not sure if it qualifies as a novella or just a really long short story, but it’s entertaining either way.

Druid Atticus O’Sullivan is six years into training his new apprentice Granuaile when he gets an unexpected visit from the Morrigan, the Celtic chooser of the dead. She tells him he must leave with her right away, and will brook no argument on the point. His magical tattoos, broken in battle, must be restored, and as there are no other druids on earth and all of the other gods think Atticus is dead, the Morrigan is the only one who can do it.