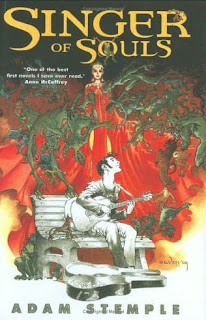 First-time novelist Adam Stemple comes from good writing stock. His mother is respected fantasy author Jane Yolen, with whom he co-wrote a children's book, so there are high hopes for his first book, "Singer of Souls" ($22.95, Tor). Stemple lives up to them.

The book tells the story of Douglas "Doc" Stewart, a recovering heroin addict and musician. (He got the nickname after a drug binge that left him talking completely in rhymes for a time. His friends began to call him Dr. Seuss.)

When he finds himself back with those same friends, preparing a needle that will take him right back into his former lifestyle, he decides he has to make a major change. He flees the temptation by going to stay with his grandmother, a tough no-nonsense sort, in Edinburgh, Scotland, where he makes a good living as a street busker thanks to his innate talent to create songs about people on the spot.

It was a good choice for him, but was the choice entirely his? When he sings a song for a mysterious woman, he ends up opening the door to a strange world he never thought existed and getting himself trapped in the middle of an age-old supernatural war.

An unsuspecting human caught in a war between supernatural powers is hardly a new idea for the genre. In fact, the last book I read, Orson Scott Card's "Magic Street," had the same premise. But Stemple handles it deftly, throwing in nice twists and never quite letting the reader know where Doc stands with the folk of faery.

He also knows his music and has an eye for detail when it comes to that aspect. The book should be an interesting read for musicians, but for those who don't know the terminology, the writer's allusions to chords and scales may get a little tedious. Most of them are brief and won't interrupt the story.

Stemple has a fast-paced, breathless writing style that keeps the reader in the action. At less than 250 pages, this novel is incredibly short by today's fantasy standards, but it packs a lot of punch into those few pages. I'm looking forward to his follow-up.

Check out the nine new album reviews on the music page and seven new book reviews on the books page. (Yes, I'm still working on beefing up the music archive, too. It's just a matter of finding the time to work on it.)

As always, if anyone's got suggestions about how I can improve the place or any information you'd like to see in the reviews that you're not seeing, feel free to drop me a line.
Posted by Fred Phillips at 1:56 AM No comments: 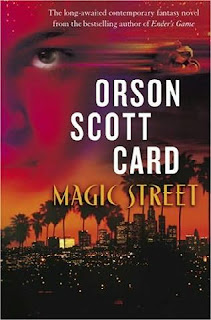 I've been a big fan of Orson Scott Card ever since I first read his science fiction tale "Ender's Game" many years ago. While I normally prefer fantasy, Card's science fiction seems to appeal to me more. I enjoyed "Enchantment," but I'm not a big fan of the Alvin Maker series. Still, I was excited at the prospect of his latest urban fantasy, "Magic Street" ($24.95, Del Rey).

The story centers around Mack Street, who was born magically and found covered in ants in a plastic bag by a young man named Cecil Tucker in the Baldwin Hills area of Los Angeles. Ceese takes the boy to Ura Lee Smitcher, a nurse who lives in the neighborhood. She ends up adopting him, and Ceese cares for him as he grows up.

Those beginnings mark Mack as unlike the other kids, but as he grows older, he finds that he's really different. He has the power to see other people's fondest wishes and grant them - but always in a twisted way. For example, when a girl in the neighborhood wishes her father who works long hours would stay home more, he's hit in the head by an I-beam at the work site and paralyzed.

Mack develops a technique for avoiding what he calls the "cold dreams" to avoid hurting people. Then he discovers the truth about who he is and what's going on. He's caught in a war between the fairies Titania and Oberon (yes, that Titania and Oberon) and the fate of the world may be in his hands.

With "Magic Street," Card attempts to do for Shakespeare's "A Midsummer Night's Dream" what he did for "Sleeping Beauty" with "Enchantment." While he does achieve that to some degree, I didn't feel the same sense of wonder that I did with the previous book. Still, "Magic Street" is an enjoyable read.

There's a bit of fun to be had in the image of Titania, queen of the fairies, as a biker babe, or Puck as a dreadlocked vagrant, and there are plenty of sly references to other literary works that readers will have fun picking out.

The story itself is engaging, part Shakespeare, part W.W. Jacobs' "The Monkey's Paw" and part Stephen King horrorfest. The characters are likeable, if a bit forced at times. There are moments when Card seems to be trying a little too hard to make sure the reader knows the characters are black, when the story would have worked with characters of any race.

In the acknowledgements, Card admits that this is an experiment to see if a white writer can write believable black characters. It came about when a black friend questioned the lack of black heroes and why he didn't have any in his books. I'm not really sure whether the experiment succeeded. Card's characters here are serviceable, but not as fully developed and engaging as those in, say, Nalo Hopkinson's work - or Card's previous work, for that matter.

For those unfamiliar with Card, I'd recommend picking up "Ender's Game" and "Enchantment" to get a feel for the writer at his best. But, if like me, you've enjoyed Card's work for years, you should also enjoy "Magic Street."