Review: "The Wheel of Osheim" by Mark Lawrence 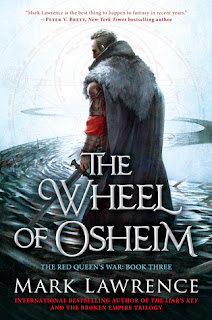 And so ends another tale of Mark Lawrence’s Broken Empire. Much like the conclusion of his first trilogy, “Emperor of Thorns,” “The Wheel of Osheim” ($27, Ace) brings us a wild finale to the Red Queen’s War.

The book opens with our reluctant hero Prince Jalan Kendeth popping out of Hell through a portal into the middle of the desert with what may be one of the most literary monologues I’ve ever read, and it just gets better from there.

After his unwanted adventure, Jalan thinks he’s punched his ticket back to a comfortable palace life, but he returns home to find anything but. His grandmother, the Red Queen, is prepared to march against her long-time enemy, and she unexpectedly leaves Jalan in a position of power just as the Dead King turns his eyes toward Red March.

It doesn’t take Jalan long to realize how much his travels have changed him, and it’s a good thing because he may be the only person who can prevent the end of the world.
Read more »
Posted by Fred Phillips at 10:50 AM No comments:
Labels: Book reviews, Broken Empire, Fantasy, Magic, Mark Lawrence, Post-Apocalyptic, Red Queen's War, Science Fiction 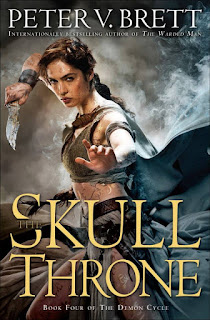 The would-be Deliverers are missing, and chaos descends on Peter V. Brett’s world of Thesa in “The Skull Throne” ($7.99, Del Rey).
Following their battle at the end of “The Daylight War,” Arlen Bales and Ahmann Jardir have withdrawn from the world, leaving power struggles in their wake.

In Krasia, the Skull Throne is vacant, and Jardir’s wife, the Damajah Inevera, tries to hold things together. But the Deliverer’s two eldest sons both make moves to try to stake their claim to the throne in his absence.

Meanwhile in the north, Leesha Paper and Rojer Inn have been summoned to Angiers with Count Thamos. The kingdom is in the midst of an attempt to form an alliance with Miln to defend against the Krasians, but the proceedings are strained at best.