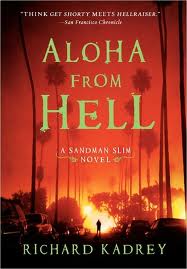 Life’s settling into something comfortable for James Stark, aka Sandman Slim, after he narrowly saved the world from destruction by a zombie hoard in Richard Kadrey’s last tale, “Kill the Dead.” As “Aloha From Hell” ($23.99, Harper Voyager) begins, Stark is waiting for his video store to be rebuilt, exploring his relationship with his new girlfriend Candy, and taking the odd job here and there – like stealing magical artifacts.

Life is pretty good, as Stark’s goes, and he’s almost abandoned his mission to destroy his one-time friend Mason, who once banished him to Hell, where he was trained in the fighting pits and served as an assassin for demon generals. Lucifer has returned to Heaven to take his place among the angels again. Stark was offered the job, but he refused. Now, Mason is trying to put himself on the throne in Hell, and an exorcism gone wrong puts Stark’s focus squarely on his old enemy.

A rogue angel who seeks to take the throne of Heaven for her own has smuggled the soul of Stark’s murdered girlfriend Alice through the pearly gates and delivered it to Mason Downtown. Now, Stark has to march back into Hell to confront Mason and get Alice back to her rightful place. In the process, he may get more than he bargained for.

Freebies: Get a sneak peek at George R.R. Martin's next book

George R.R. Martin is offering fans a Christmas gift with an excerpt from "Winds of Winter," the next installment in his Song of Ice and Fire series. If you're not caught up with the series, you should know that the excerpt features spoilers. If you are, click here to check it out.
Posted by Fred Phillips at 8:50 PM No comments:
Labels: Freebies, George R.R. Martin, Song of Ice and Fire 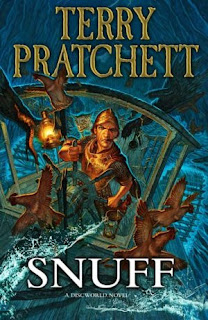 Commander Samuel Vimes of the Ankh-Morpork City Watch is on holiday in “Snuff” ($25.99, Harper), Terry Pratchett’s latest novel of the Discworld. It’s not that he wanted to go on holiday. As far as he’s concerned a copper is never on holiday. But his wife, Lady Sybil, has coerced him into visiting her estates in the country. Of course, being Sam Vimes, it’s not long before he finds some trouble.

It starts with an altercation with a local blacksmith who has a problem with the upper class – an uncomfortable position Vimes finds himself in thanks to his marriage to Sybil. When a late night meeting is arranged between Vimes and the blacksmith, the commander and his butler – a slightly reformed street tough named Willikins – arrive at the meeting spot to find no blacksmith and a lot of blood. But Vimes’ would-be framer was a little too messy, leaving behind evidence that the blood belongs not to the blacksmith but to a goblin.