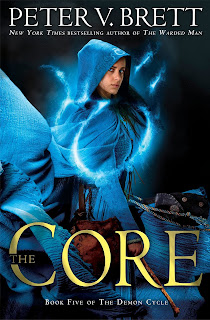 Coming off major disappointment with my last series wrap-up book, I jumped right into another with Peter V. Brett’s “The Core” ($8.99, Del Rey).

Sharak Ka has arrived on a world in utter chaos. Thanks to their captured Alagai Ka, the demon mind prince, Arlen Bales and Ahmann Jardir have discovered that the human race’s prospects in the final battle against the corelings are even more grim than they thought. It will take bold action to avoid the utter destruction of humanity, and they have to roll the dice, with the fate of the world in the balance.

As they prepare for their journey to the Core to face whatever horrors await, much work still has to be done to unite the people on the surface of the world against a much larger threat. That work largely falls to Inevera, who rules the Krasians in all but title with Jardir missing, and Leesha Paper, now the countess of the Hollow. Somehow, they have to repair fractured relationships and focus people on a new threat – a massive demon army no longer working as individuals, but as a well-oiled machine guided by the strategy of the minds.
Read more »
Posted by Fred Phillips at 3:23 PM No comments:
Labels: Book reviews, Demons, Fantasy, Magic, Peter V. Brett, The Demon Cycle
Newer Posts Older Posts Home
Subscribe to: Posts (Atom)