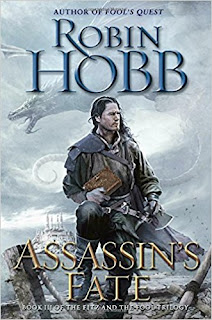 Since I suspect it will be my last trip with FitzChivalry Farseer, I put off reading Robin Hobb’s “Assassin’s Fate” ($32, Del Rey). Then, when I finally began, I took it slowly to savor this last journey.

Fitz and the Fool, masquerading in his Amber character, open the story in the Rain Wilds, on their journey to avenge the death of Fitz’s daughter Bee at the hands of the Servants of Clerres. Ravaged by grief, Fitz plans to bring the city down around its prophets and go out in a blaze of glory.

Unbeknownst to our favorite assassin, though, Bee is still alive. She’s held captive by a Servant named Dwalia and her minion Vindeliar, who can control minds. Dwalia is convinced that Fitz’s daughter is the Unexpected Son of prophecy, and she must bring her to Clerres to wring secrets from her and regain her standing among the Servants. Bee believes that her father has given up on her and put the Fool ahead of her. She’s beaten and abused, but not broken.

Meanwhile, as he usually does, the Fool is playing his own game in addition to helping Fitz seek revenge.
Read more »
Posted by Fred Phillips at 11:45 AM No comments:
Labels: Assassins, Book reviews, Dragons, Fantasy, Magic, Robin Hobb, The Fitz and the Fool
Newer Posts Older Posts Home
Subscribe to: Posts (Atom)