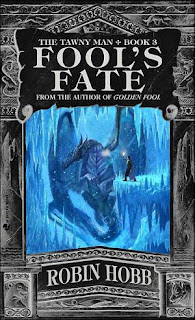 Reading "Fool's Fate" by Robin Hobb ($24.95, Bantam Spectra) was a bittersweet exercise for me. Like Hobb's other tales of FitzChivalry Farseer, I found it enthralling and entertaining, but at the same time, it was like saying goodbye to an old friend.

Back in the mid-1990s, I picked up a copy of the first tale of FitzChivalry Farseer, "Assassin's Apprentice," and immediately became a fan of the author, who also writes as Megan Lindholm. That first series, "The Farseer Trilogy," was the best fantasy series of the 1990s as far as I'm concerned. Though "Fool's Fate" leaves a few questions unanswered, the close of the book has an air of finality, and Hobb has said she doesn't think there are any more stories to tell about Fitz and the Fool.

Though I have often chastised authors in my reviews for sticking with familiar characters long after their story is over, I find myself on the other side of the argument this time. I think I'd really like to read a few more tales about Fitz, if they were done as well as these first two trilogies.

Since most of the world thinks he's dead, this tale finds Fitz still masquerading as Tom Badgerlock and quietly helping prepare Prince Dutiful for the biggest challenge of his young life. To win the hand of Elliania, the Narcheska of the Out Islands, and unite the enemy kingdoms, he must first meet her challenge - to travel to the remote island of Aslevjal and bring her the head of the dragon Icefyre, which legend says is encased in the glacier that covers the island.

The White Prophet - the man that Fitz has known most of his life as the Fool and lately as Lord Golden - has foreseen his own death on the journey. In order to protect his old friend, Fitz arranges for him to be left behind, but the Fool has other plans.

As if those things weren't enough for Fitz to deal with, he's also given command of the prince's Skill magic coterie, which includes Fitz's assassin mentor Chade and a slow, but powerful, youngster named Thick. He's sworn to protect and teach the runaway son of Burrich, the man who raised Fitz. He's being courted by a leader of the Wit magic - the ability to bond with animals, which is feared and despised - who wants to teach him to better use his gift. Finally, Fitz's biggest secret is about to be revealed when his daughter, adopted by Burrich after Fitz was believed dead, is threatened because of his mission.

There are a lot of threads to weave together, but Hobb does it deftly, leading the reader on a breathtaking ride from beginning to end.

The most striking development in this book is the transformation of Fitz himself. After six books, the self-pitying, tortured soul is finally coming to grips with himself and accepting who and what he is. Though always fascinating, he becomes a much more likeable character through the course of "Fool's Fate."

As always, Hobb is masterful when it comes to intrigue, both in the court at Buckkeep, among friends and in the hidden agendas of the Outislanders. She uses it to twist the story in ways the reader doesn't expect and also paints shadows in corners where there are none to create a sense of unease and distrust throughout the book.

If, in the future, Fitz finds himself in another situation worthy of a story, I'll look forward to it. If not, Hobb has provided a fitting (if perhaps a bit happier than expected) end to his tale.