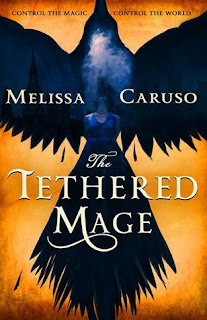 
First, let’s cover what I think is a pretty big flaw in this story, and that’s Amalia’s relationship with Zaira. From the Falcon’s viewpoint, she has basically been enslaved. Though she’s treated well and given every luxury, she’s not allowed to leave the Mews without her Falconer, and if Amalia can’t control her power, Zaira will be killed. From the Falconer’s point of view, she’s saving Zaira from herself, which also has some truth, given the tragedies we learn of in her past.

I expected their relationship to evolve through the course of the book as they came to understand each other. There are moments where the Amalia seems to feel at least a little conflicted about the situation, but she never really seems to grasp Zaira’s point of view. Given the events of this book, I suspect that struggle will come into play in future volumes, but it does leave the reader feeling a little bit less empathy for the protagonist.

That said, “The Tethered Mage” was still a fun read. It threatened from time to time to get bogged down in politics, but always managed to pull itself out. The last third or so of the book is a pretty intense thrill ride. Sure, Amalia probably should have seen some of the developments coming, but that obliviousness is part of her character.

Though Amalia is the main focus of the tale, it’s Zaira who really steals the show. It’s a shame that we don’t get a little more of her personality – a frank and blunt approach to life hiding layers that we only get hints at here. Plus, she’s just a badass. I hope that she’ll play a bigger and bigger role as the series goes on, as I think, at this point, she’s really a far more fascinating character.

Despite some issues, “The Tethered Mage” is well written and entertaining. There’s a lot to build on from this first volume, and I’ll definitely sign up for the second tale.