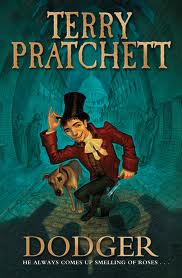 In “Dodger” ($17.99, HarperCollins), Terry Pratchett does something that he’s rarely managed. He infuses a non-Discworld book with the same kind of fun and whimsy found in his long-running series.

“Dodger,” an historical novel of sorts, pays tribute to Victorian-era London, as well as one of its most famous authors, Charles Dickens. Dodger is a 17-year-old street kid who makes a living as a tosher, someone who goes into the sewers to try to salvage a living from coins and other items lost down the drains. He also has a knack for having valuable things land in his hands, though he would, of course, never stoop the thievery.

His life changes one stormy night when he comes upon a young girl who jumps out of a coach and flees from a couple of large men. Dodger dives right into the fray, delivering a good whipping to the thugs and saving the girl, who turns out to be much more than the boy ever expected.

His heroic act brings him to the attention of a newspaper writer by the name of Charlie Dickens, who takes a great interest in him and hopes to use Dodger to glean more information about the girl and her assailants. That leads to a series of adventures that has the urchin rubbing elbows with some of the elite of London society – both real and fictional – as he tries to unravel a mystery with far-reaching political implications, and, of course, get the girl.

Though obviously based on Dickens’ Artful Dodger, the character in Pratchett’s book is quite different. He’s the same kind of street-smart, ne’er-do-well scoundrel, but Pratchett’s Dodger is a good-hearted, caring and likeable sort of fellow. He has the reader cheering for him from the very beginning, and though not everything he does is heroic, he certainly has more of a code of ethics and honor. Not everything in his life is about himself.

Pratchett weaves history and fiction together quite nicely, which, in one instance, leads Dodger to a fateful meeting with one Sweeney Todd, which furthers his legend.  Liberties are taken, naturally, with the historic figures and events, but unless you’re a student of British history, you’re not likely to be pulled out of the story by it, or even notice.

“Dodger,” despite not being a Discworld  novel, is one of the most entertaining and enjoyable stories that Pratchett has penned in some time. It’s a fun ride that readers will be happy to take, and it will erase some of the doubts created by the rather mediocre collaboration with Stephen Baxter earlier this year.