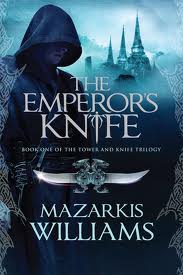 I’ve been meaning to get around to Mazarkis Williams’ “The Emperor’s Knife” ($14.99 Night Shade Books) for a while, but a recent giveaway of the ebook on the publisher’s site gave me a great reason to make it now.

Williams paints a picture of an empire being attacked by magic. Strange patterns begin to appear on the skin of those infected, and eventually that person will be consumed and controlled by the master of the pattern. The emperor Beyon has ordered that all those showing the pattern be put to death. Unfortunately for him, the lines have appeared on his own skin. Thus far, he has hidden them well with the help of his mages, and the pattern has not taken his senses. But a few key figures in the palace know about it, which sets in motions the machinations to remove him from the throne.

Traditionally, when a new emperor is named, all of his siblings are killed to eliminate rivals to the throne. In this case, one was spared. Beyon’s brother Sarmin has been locked in a tower of the palace for most of his life, spared the knife. He is about to become an integral part of the plots for and against his brother. The fate of the empire may rest upon Sarmin, his horsewoman bride to be Mesema and the aging emperor’s assassin Eyul.

To be honest, it took me a little while to get into “The Emperor’s Knife.” I thought it was an interesting tale, set in an interesting milieu. The middle-eastern setting is one that is picking up lately, but has been underutilized in fantasy. Then, we got into the magical duel between Sarmin and the Pattern Master, and the system truly intrigued me. I found the pattern system fascinating and can’t wait to learn more about it and how it works. It made the latter half of the book really sell me on the story as a whole.

Though an assassin features prominently in the book and the image on the cover is of the typical hooded man that graces many assassin fantasy covers (this exact image, in fact), it’s certainly not the typical assassin tale. The action and emotion of the story rests far more on the shoulders of Sarmin and Mesema than Eyul, who, at times, I felt was almost underplayed. He’s a fascinating character whose background I would have liked to explore a little more.

Though I had mixed feelings about “The Emperor’s Knife” in the early going, by the end Williams had completely won me over and given me an emotional investment in the characters and how events unfolded. It’s a solid fantasy debut, and it moves the second volume, “Knife Sworn,” released last month, to the top of my stack.