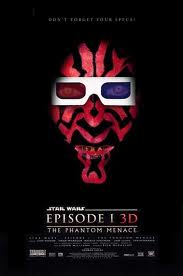 I both looked forward to and kind of dreaded it when I heard about the 3D conversion of the Star Wars movies. I was excited for my son to get the chance to see them on the big screen, but there is the gimmickiness of 3D, and you always have to wonder what George Lucas will decide to change in a new edition.

I took my son to see “The Phantom Menace” last week, and I had a few observations. First, I’ll admit that I really liked the movie when it was originally released, and I’ve never quite understood the hatred for it. I think, perhaps, most of us had expectations that were far too high. We expected something that connected with us like the original movies, but these were made in a different time and, really, a different world. I don’t believe they had a chance to be nearly as good as the originals, which were a fairly new and fresh idea when they were released.


Let’s go ahead and get the 3D out of the way to start. It’s unimpressive. I’ll be honest and say that I think 3D only really works with animated movies. I’ve seen it used well in films from Pixar and Dreamworks, but not really in a live action movie. There were times during “The Phantom Menace” when I didn’t notice the 3D at all, and apart from a few approach scenes to the cool landscapes, it hardly made an impact. The pod race was cool, but not nearly as cool as I thought it should be. Beyond that, when I did notice it, it looked less like a true 3D image and more like they had cut the 2D image out of the film and moved it forward, which is, essentially, what they did. There were, thankfully, few gimmicky things flying toward the screen shots, but overall, the extra dimension didn’t enhance the movie.

Though I saw it twice in the theater during its original release, I’ve probably only watched “The Phantom Menace” a handful of times since, and not with any real focus. I was able to come into it with a fairly fresh perspective 12 years later. I also had the six-year-old perspective that I’ve never had on it before. He had never seen the complete movie. My son’s major complaint was too much talk and not enough action, which I kind of have to agree with. Lucas went around the world to explain things that he didn’t have to in the earlier movies. I mean, we all pretty much accepted the reality of the Force without some silly explanation about midichlorians. My son was bored through large stretches of the movie, but rapt during the pod race and the ending scenes, cut between the battle for Naboo and the light saber duel between Obi-Wan Kenobi, Qui-Gon Jinn and Darth Maul.

One of the biggest letdowns of the movie, I think, is the character of Darth Maul. There’s the stuff of a great villain there, but instead of developing him as a menacing Darth Vader-type character, he serves as more of a nuisance for the Jedi than anything else – summarily dealt with and let’s move on to the next one. I think it was a missed opportunity.

The creepy relationship between Anakin and a 10 year older Amidala was always weird to me, and remains so. I think it also created more problems for the later movies, when Anakin was 10 years older and Amidala still appeared the same age.

Then, there’s the nearly universally reviled Jar Jar Binks. I admit that I don’t mind him. Sure, he’s often annoying, but he serves his purpose. My son had a few laughs out of him, and I don’t think he’s any more annoying than the Ewoks, which served the same purpose. Truth be told, though, my son was more interested in R2D2 and C-3PO than Jar Jar, or the Ewoks for that matter.

The real problem for “The Phantom Menace,” though, is the same as for all prequels. We already know how it turns out. We know this little kid is going to grow up to be Darth Vader, so it’s difficult to build any kind of suspense. Sure, in the originals, we kind of figured that Luke was going to win and everything was going to turn out all right. That’s the way things go in Hollywood. But we didn’t know it. Here, no matter what happens, we know this kid will be Darth Vader, and it’s tough to get an emotional investment in the character.

So 12 years later, I admit that I didn’t enjoy the movie as much as I did the first time around, though much of that may have been being caught up in the height and excitement of a resurrected Star Wars franchise. The original "Star Wars" was the first movie I saw in the theater at the age of 6, and I have always been and will always be a fanboy. I also don’t think it’s nearly as bad a movie as most people make it out to be. Yes, the original trilogy is far superior in every way, but “The Phantom Menace” remains entertaining despite its flaws if you can set expectations aside.

I don’t know what the remaining 3D releases of the movies will hold, or even if we’ll get them all since they’re scheduled for release a year apart, and who knows if 3D will even still be around six years from now? The 3D of “The Phantom Menace,” though, doesn’t impress and certainly won’t change your opinion of the movie. The best thing to come out of the whole experience may well be the chance to share the movies on the big screen with my son. I definitely look forward to that.