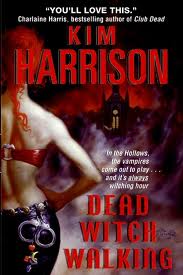 When I occasionally go on and on about Jim Butcher’s “Dresden Files,” which I’ve had a habit of doing for the past 10 years or so, almost invariably, someone will tell me that if I like Butcher I really should read Kim Harrison. So, after years of hearing that, I finally picked up the first book in her Hollows series, “Dead Witch Walking” ($7.99, Harper Voyager).

After a genetically-engineered virus carried by tomatoes wipes out a large portion of the human population, the Inderlanders – witches, vampires, werewolves, leprechauns, fairies, pixies, etc. – who are largely unaffected, reveal themselves to the world. They pretty much come to the rescue while humans were being decimated by the virus, and now the humans and the supernaturals are having to learn to co-exist – sort of.


Rachel Morgan is a witch and an investigator for the I.S., essentially the supernatural police force, but lately she’s been getting lousy assignments and has a boss that’s out to get her. She wants to leave the I.S. and strike out on her own, but the problem is that everyone who leaves the I.S. ends up dying an ugly, painful death. Rachel is different, though. The boss wants her gone, and she could likely quit without a death threat – except one of the bureau’s best investigators, vampire Ivy Tamwood, decides to quit and go with Rachel. In a rage, the boss puts a contract out on her, and her only hope for saving herself is to prove that a respected councilman is actually a drug kingpin and turning him over to the I.S. That mission could put her in more danger than the contract.

I’m really torn over this book. Harrison has put much more effort into this world than the standard urban fantasy setting, and there’s quite a lot of promise here. On the other hand, the first half of this book is utterly boring. Rachel is not very likeable, and her vampire partner Ivy is even less so. Of the trio of main characters, only the pixie Jenks won me over even a little bit in the early going. I almost stopped reading several times, but kept seeing reviews that said it gets better. They were right. Things pick up in the second half of the book, and it becomes much more enjoyable.

I’ve always been a fan of worlds where good and evil weren’t clear cut, and Harrison does that nicely. Though the villain of the book, councilman Trent Kalamack, is ruthless and obviously not a very nice guy (or whatever he is), he does good things for people in his own way. I won’t spoil what the people of the book consider his most revolting enterprise, but given what it is, it’s kind of hard to not cheer him on just a little bit despite the fact he’s a cold-blooded killer. It’s an interesting approach, and Trent is an interesting character – more interesting at times than Rachel.

While the second part of the book turned it from a snoozer into an OK read, I’m honestly not sure if I’ll continue the series. I picked up a copy of the second volume for 99 cents on my Nook a few months back, so I’ll probably at least go that far and see where it takes me. There’s enough promise here, and enough good reviews of her works out there, to pique my interest just a little.