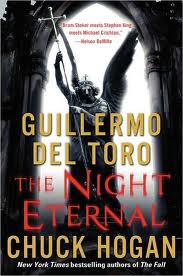 As we reach the conclusion of Guillermo del Toro and Chuck Hogan’s vampire trilogy in “The Night Eternal” ($26.99, William Morrow), the Master and his vampiric legions have been in control for two years. Most humans have lined up like cattle with the new order. Some are placed in camps for bleeding and breeding, others continue to work for vouchers for food and clothing. Very few resist.

The Master has thrown the world into a nuclear winter, perfect for he and his kind. Only a few hours of sunlight each day penetrate the toxic clouds that cover the earth. Ephraim Goodweather, the CDC doctor who first documented the vampiric virus, has let the resistance down. He’s tormented by the loss of his wife to the virus and the kidnapping of his son by the Master, and he’s turned to stealing from the dwindling supply of prescription drugs in abandoned stores and hospitals to deal with it. He’s become unreliable to his partners, fellow doctor Nora Martinez and one-time exterminator Vasiliy Fet, who are determined to decipher the Occido Lumen, a book left to them by vampire hunter Abraham Setrakian, who was killed by the Master. It might hold the key to destroying the creature once and for all and freeing the world from the rule of the vampires.


For those who have followed the first two books, “The Strain” and “The Fall,” the shift here will be jarring. Those books have focused on the science behind the vampire virus and have painted it as perhaps even something we brought on ourselves. “The Night Eternal” does a 180 on that, taking a much more mystical approach to the vampires and placing their roots in the destruction of Sodom and Gomorrah. While the stories of the origins of the vampires are interesting takes, it kind of hurts the trilogy as a whole. The entire lead up has been the biological nature of the monsters, and now the magical is thrown in to explain it, and it almost seems like a cop out in some ways.

It might have been more effective if the scientific-minded Eph and Nora had some sort of inner struggle in dealing with the shift from what they believed to the Biblical, but they seem to roll with it pretty easily.

Perhaps it was an attempt to connect the vampires that del Toro and Hogan had invented to traditional vamps. But the fact that these creatures were so different, so monstrous, was one of the things that drew me, as a vampire-weary reader, into these books. I liked the fact that there were no handsome, charming bloodsuckers with moral dilemmas. I liked that they were ugly, vicious and without conscience, and I also liked the idea that there was a scientific explanation for them. The shift here kind of spoils it for me.

After an interminably slow start, “The Night Eternal” did eventually pick up, and ultimately, I enjoyed the book. Still, though, I can’t help but somehow feel a little cheated by it at the same time.