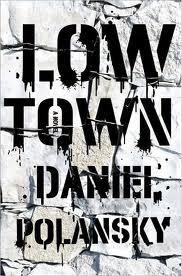 It’s been a good couple of weeks for me and first novels. First, I enjoyed Mark Lawrence’s dark debut “Prince of Thorns,” so I decided to take a shot on another one and picked Daniel Polansky’s “Low Town” ($25.95, Doubleday) off the stack. It proved to be another good choice.

Low Town is a pretty ugly place. It’s a place where immigrants who struggle to gain acceptance, criminals and the lowest of the low in society collect. It’s a place filled with crime and drugs and pretty much devoid of hope. The Warden is a former soldier and ex-cop turned drug addict and dealer who now spends his days there, moving his product and trying to protect his turf, living in the inn that he co-owns with a close friend and military buddy.

When the first child goes missing, the Warden doesn’t want to get involved, but when he stumbles across her body in a back alley, he’s drawn into the investigation.
It’s a path that leads him into conflict with some old friends and acquaintances that he’d probably prefer not to deal with again, and opens up some old wounds that were probably best left alone.

“Low Town” offers an interesting mix of genres. Sure, it’s a fantasy. There’s magic. It's a pre-industrial world. There’s a fantastic creature or two roaming around. But it doesn’t read like a fantasy. At its heart, it’s a gritty, grimy, noir detective story with the fantasy elements secondary. The focus is on the crime and solving the mystery, which just so happens to involve dark magic.

The Warden, while not a nice guy by any stretch of the imagination, is actually quite the sympathetic character. He has flaws, and he knows it. He struggles with them. While finding the body of the first murdered child puts him in the crosshairs of his former partners and bosses in the city’s secret police force, but it doesn’t complete force him into the investigation. He’s angered by the disappearance of the children, and though he struggles against it, he feels a need to take care of his own and try to take the killer down. You know, whether his hand was forced or not, eventually the Warden would give in to that thing in his nature and take the case.

Polansky populates Low Town with a colorful assortment of characters, one of the most interesting of which is crime lord Ling Chi, who the Warden has an uneasy relationship with. I hope we cross paths with him in future volumes, which I’m sure are coming. Polansky has only wiped a bit of the grime off the surface of Low Town and its potential, and I feel that there are many more tales to be told among the crumbling decay. I look forward to them.