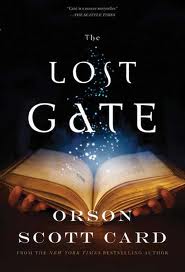 Here’s one of those books that’s been in my to-read pile for far too long. So long, in fact, that the paperback version is already out.

Danny North is born into a family of magic-users living on a compound in Virginia in Orson Scott Card’s “The Lost Gate” ($7.99, Tor). These families, scattered across the world, once ruled the Earth as gods before they were cut off from their homeland and their source of power. Now, the magic is greatly diminished, only a shadow of what they used to wield, but the families guard it jealously.

Danny grows up believing himself to be the lowest of the low among his people – a drekka, one without magic. As a teenager, he can’t perform the simplest magical acts that young children are capable of, and though he is a quick-witted, fast learner with a gift for languages, he finds himself an outcast, just one whim of the elders away from finding himself in the family cemetery.


But when he plays a prank on a couple of the younger children who won’t obey him during lessons, he learns that he’s not a drekka at all. He has magic, but it might be worse than not having it. He is a gatemage, banned by all of the families since the last Loki closed all of the gates to their homeland, trapping them here. To keep peace between the jealous families, gatemages are executed as soon as they are discovered. An inspecition visit to the compound from a Greek family with a daughter who can sense gate magic sends Danny fleeing into the world of humans – or drowthers – in a desperate attempt to survive and learn how to control his magic.

Card provides an interesting view of the gods of the ancient world in the first volume of his Mither Mages series. Rather than all-powerful immortal beings who control the world, Card’s Zeus and Odin are simply powerful magic users from another world who use Earth as their playground until they’re trapped here. In fact, there have been many Zeuses and Odins and Thors over the years, as the names are more of a title passed on from one generation to the next.

“The Lost Gate” is as much a coming of age tale as a fantasy since quite a bit of it is spent following Danny as he tries to adjust to the real world after a very sheltered childhood, and as he wrestles with the moral dilemmas that his unique powers bring about. What’s to prevent a life of crime when he can create a gate into any building, grab what he wants and instantly gate himself miles away? Or, on the other hand, should he tinker with people’s lives even in small, positive ways, as he attempts to do later in the book when he enters school?

The magical system in the book also bears watching as it develops in future volumes. It has the potential to be a pretty complex entity with each mage having his or her own specialty and own level of power, which would ultimately decide rank in the society of the families. It’s not exactly a new idea – what is? – but it’s approached in a unique way.

As always, Card’s work is inventive and interesting, and he provides a flawed, but likeable character in Danny that the reader can understand and get behind. The story moves along at a fast pace, and it’s an enjoyable read. There’s also just a hint of foreshadowing at the end, not too heavy-handed, that provides some interesting options for the next book in the series.