Review: "I Shall Wear Midnight" by Terry Pratchett 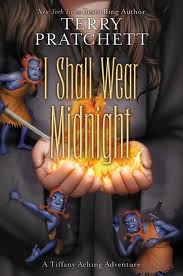 It was with some sadness that I read the blurb on the back of Terry Pratchett’s “I Shall Wear Midnight” ($16.99, HarperCollins) announcing that this was to be the last tale of Tiffany Aching and the Wee Free Men. Though the Discworld series was aimed more at the teen audience, I found the books quite entertaining. At least Tiffany and the Nac Mac Feegle go out on a strong note, though.

As the story opens, Tiffany is still struggling to make her way as a young witch on the Chalk, a place where having a witch is a fairly new idea. She’s constantly working at her witch duties, which include tending to the sick, childbirth and just generally helping people who need help. Despite the fact that everything she does aids someone and the people there have known her since she was born, she’s noticing a growing anti-witch sentiment. The old storybook tales of witches stealing children and doing all sorts of other nasty things are starting to swirl around again.


Things come to a head when Tiffany rescues a 13-year-old girl from an abusive father and takes her, temporarily, to the safety of the Feegles’ mound to recover from her injuries. Around the same time, the old Baron, who Tiffany has been caring for, dies and his son Roland, who Tiffany once rescued from magical imprisonment, becomes the new Baron. Accusations begin to fly, and Tiffany soon learns that when she danced with the Wintersmith, she woke something old and evil, bent on the destruction of all witches. Now, she’ll have to face the Cunning Man and defeat him to save her friends and herself.

“I Shall Wear Midnight” is certainly the darkest of the four books featuring Tiffany Aching. Being aimed at teens, all of the books have tackled some subject that concerns that crowd – jealousy and bullying are part of the focus here. But you have story elements like a drunk, abusive father that beats his teenage daughter almost to death, causing her to lose a child, who then attempts to kill himself when he realizes what he’s done. It’s not exactly what you think of when you think Terry Pratchett. But he handles it without any heavy-handedness and manages to keep the story light and inject his trademark humor into it in spite of some of the darker turns the story takes.

It is a pivotal point in the development of Tiffany, and perhaps that’s why Pratchett decided to end the tales here. At the end, she’s no longer the teenager searching for an identity and approval from the older witches. Instead, she has come into her own. Though still a teen in age, after the ordeal of “I Shall Wear Midnight,” she emerges a woman grown and the equal of her witchy peers. Just don’t tell Granny Weatherwax I said that.

While this might be the last tale to focus on Tiffany and the Feegle, I certainly wouldn’t be surprised to see them pop up again on the Discworld. I’d hate to think that we’d never get to see Rob Anybody or Daft Wullie again. The Discworld would be a much less interesting place without them, and there are still a few unresolved questions from the books out there, too.

As always with Pratchett, “I Shall Wear Midnight” is colorful, lively and entertaining, and it brings the Wee Free Men cycle to a solid, if a bit sad, close.