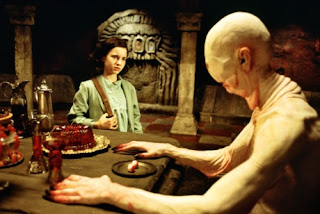 When you're watching a foreign movie, there's an easy way to tell if it's really good. At some point during the movie, you forget that it's subtitled. That happened to me while watching "Pan's Labyrinth" over the weekend. At the risk of sounding like the redneck I am, I'll admit that I hate subtitles. But somewhere during the final scenes, I suddenly realized again that the movie had them. I had been completely absorbed in the world presented by Guillermo del Toro.

The movie revolves around a young girl named Ofelia who travels to Spain in 1944 with her pregnant mother, who is in a seemingly unhappy marriage to Capt. Vidal, a vicious and merciless officer in the Spanish Army. Shortly after her arrival, she begins to see fairies who eventually lead her to a faun who tells her she's the daughter of the king of the underworld. The faun assigns her tasks that must be completed before she can take her rightful place. While trying to complete those tasks, she must also deal with her mother's worsening condition and the war between her stepfather's men and the rebels in the mountains.

At heart the movie is a fairy tale, but it's definitely not for kids. There is, of course, a lot of violence and some very dark themes that run through the movie, though, to me, the violence was not as graphic as some reviews have suggested.

When Ofelia is in the fairy worlds, the movie is absolutely beautiful. The creatures she encounters during her challenges are both whimsical and sinister at the same time. The fantasy land sequences play almost like some warped and dangerous version of "Alice in Wonderland." It's a world that I'd like to spend more time in, and if I have one complaint about the movie, it would be that I would have liked to explore the fantasy side of the film more. Some of those scenes, like the one in the hall of the Pale Man, went by far too quickly for me and left me wanting to go back.

I don't mean to say that the "real world" part of the movie was at all weak. It was equally absorbing story-wise and probably could have stood on its own without the supernatural elements. But I still longed for the visual treats and wonder of the fantasy world.

"Pan's Labyrinth" is an impressive achievement for del Toro, so much so that "The Devil's Backbone" has just moved to the top of my "to see" list.

This was an incredible movie and left me with all kinds of emotion at the end.

Definitely NOT a kids movie as you noted!