Review: "The Children of Hurin" by J.R.R. Tolkien 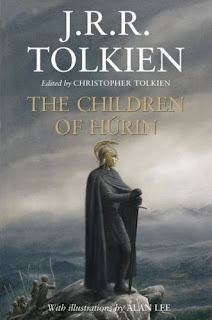 I always approach posthumous works with more than a little skepticism, but there are just times when I can't resist checking them out. One such time is when it's a "new" work from J.R.R. Tolkien. "The Children of Hurin" ($26, Houghton-Mifflin) was compiled from a variety of Tolkien sources and stories by his son Christopher, and while it's not "The Hobbit" or "The Lord of the Rings," it's still an entertaining tale.

The warrior lord Hurin stands with the elves against the dark lord Morgoth and is taken captive, cursed to watch the doom of his children, Turin and Nienor, as they battle the advancing forces of Morgoth that seek to plunge the world into darkness.

Don't expect "The Hobbit" or "The Lord of the Rings" from this book. While those tales meandered at a leisurely stroll taking detours and admiring the scenery, this one moves at breakneck pace from action to action. This is more like Tolkien's attempt at a Shakespearean tragedy.

There are times when "The Children of Hurin" seems no more than an outline of a story that Tolkien had been planning and reads as a historical report of the action rather than a story. There are moments of great detail, such as Turin's battle with the dragon Glaurung, and other times where events happen so quickly that they don't have the full impact that they should.

Some have suggested that "The Children of Hurin" is an attempt by Christopher Tolkien to cash in on his father's legacy, and reading the book, I don't believe that. I do think it was an honest attempt to give fans a longed-for tale equal to his father's best. Unfortunately, it falls a bit short.

That said, the book is certainly worth reading for Tolkien fans. The valiant, yet troubled Turin is an interesting character with the potential to have been one of Tolkien's greatest with some development. The story should also please fans who would like to know more about the history of Middle-earth, but find wading through "The Silmarillion" tough going. And, of course, there are the gorgeous illustrations by Alan Lee. It's a good book, but ultimately it is what it is - an unfinished tale.

Get "The Children of Hurin."