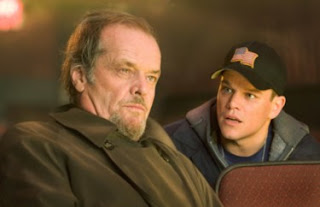 Though "Goodfellas" is one of my favorite movies, I've been underwhelmed by most of Martin Scorsese's more recent movies. That's why I was pleased to see him return to the kind of gritty, and yes occasionally gory, movies that have produced some of his best work.

"The Departed" features Matt Damon and Leonardo DiCaprio as double-agent police officers playing against each other. DiCaprio tries to take down Irish crime boss Frank Costello (Jack Nicholson) as an undercover member of his crew, while Damon is actually working for Costello and feeding him information as the officer officially assigned to take him down. Costello has his own secrets, but those I won't reveal.

Initially, the film is a bit confusing simply because DiCaprio and Damon are so similar, and I found myself playing a game of which is which (perhaps fans of the two won't have that problem). After I got it all sorted out, though, the movie became an enjoyable game of cat and mouse with some good performances among the all-star cast.

While the movie focuses on Damon and DiCaprio, the real star is Nicholson. He plays Costello flamboyantly over the top, and it's great fun watching him chew up the scenery. It's perhaps his most entertaining role since "The Shining." Even though I'm not a fan, I also enjoyed seeing Alec Baldwin ham it up as Damon's somewhat bumbling boss.

The film is apparently an adaptation of the Hong Kong movie "Infernal Affairs." Having never seen it, I can't make the comparison. All I can say is that this one feels like a Scorsese piece from top to bottom.

Ultimately, "The Departed" is what Scorsese does best. It's at times hilariously funny and at times brutally violent. Much like real life, the good guys don't always win, and the things that happen don't have to "make sense." It's his best film, at least since "Casino" and possibly since "Goodfellas."