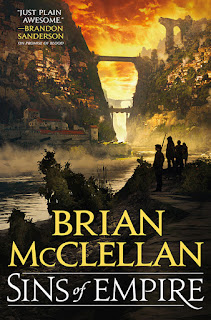 Last, but not least, is Mad Ben Styke, a hero accused and convicted by Jes of war crimes. He’s believed to have been executed, but he survived the firing squad and now lives in a labor camp, hoping in vain for his parole. When he doesn’t get it, a mysterious lawyer named Gregious Tampo makes him an offer. All he has to do to earn his release is get close to Vlora and be prepared to do whatever is necessary.

With this second trilogy in the world of the Powder Mages, McClellan picks up right where he left off. Some lesser characters in the first trilogy take more prominent roles here, but little else has changed, and that’s a good thing. The writing is still superb, and there’s a nice web of intrigue despite the fact that one of the surprises of the story is not all that surprising.

McClellan’s two primary strengths as a writer remain golden in “Sins of Empire.”

First, he’s able to connect the reader with his characters very quickly. Sure, we already know several of them, but not with the depth that we knew Taniel and Tamas in the first trilogy. He begins to build that connection immediately, though. As I said in a previous review, the novelty of his magic systems, particularly the powder mages, drew me in, but it was the characters that kept me reading. That doesn’t change here.

Second, McClellan writes absolutely amazing battle scenes. He puts you right in the middle of the action where you can smell the smoke of the gunpowder and hear the musket balls whizzing past. The big battle in this novel is masterfully done, as always.

Surprisingly, now that it’s been established and we know how it works, the magic takes a little bit of a back seat in this tale. It’s still important, of course, but doesn’t get nearly the focus that it did in those early novels. It’s as much a part of the landscape now as the swords and flintlocks the soldiers carry.

I wondered if McClellan would be able to match the compelling urgency of his first trilogy now that the smoke has settled on the crisis that molded his world, and the answer, at least in the first installment, is absolutely. “Sins of Empire” is a most worthy successor.