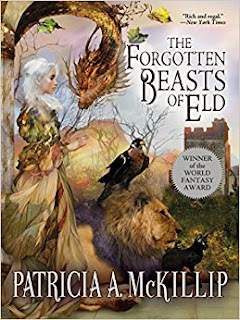 
“The Forgotten Beasts of Eld” proves to me again that, sometimes, the old ways are better. McKillip’s 1974 novel recalls a time before fantasy novels became 1,000-page doorstops, often padded with lengthy descriptions and asides that don’t really add to the story itself. I’m not opposed to those huge novels, but what I love about McKillip’s style here is that every single word propels the story forward, and at the end, I don’t feel like I’ve lost anything for not having the extra length.

I know Sybel and Coren and even some of the beasts and lesser characters without having to take long side trips with them to learn about their past or get a glimpse of their inner turmoil. I understand it through the story. I have a solid picture of the setting without long, rambling description or history lessons. The story serves the world and the world serves the story, as it should be.

Epic doesn't necessarily mean massive and sprawling. At a relatively brief 240 pages, "The Forgotten Beasts of Eld" is certainly nothing short of epic.

That’s not to say that the tale is sparse. Though McKillip wastes no words, the ones that she puts on the page are lyrical and magical. Despite the speed with which the tale moves, there is an undeniable flow that carries the reader along and catches us up in the action and the drama of Sybel’s story, and it’s a remarkable work of literature.

“The Forgotten Beasts of Eld” makes me sorry that I’ve neglected McKillip’s work for so long. I will soon remedy that situation.