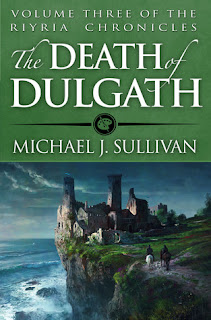 Add to that the fact that Royce and Hadrian don’t exactly endear themselves to the local public upon their arrival, and you have a very uncomfortable situation for our favorite thieves.

To this point, Sullivan’s Riyria tales have been marked by the elements of classic swashbuckling fantasy. Those are still here, but “The Death of Dulgath” is a bit of a different animal. It’s still great fun with plenty of action, but it’s less of a caper tale and has a little more of a mystery feel. As a result, Royce and Hadrian spend a lot more time trying to unravel the truth, not only about Lady Dulgath and the plot on her life, but in Royce’s case, about himself.

Even in a slightly different frame of mind, Sullivan’s characters are still engaging, and six books in, we continue to learn more about them and their strange relationship. This story provides critical moments in the development of both, though perhaps more for Royce.

As an added treat, we learn some important nuggets about the history of Sullivan’s world and some of the things that we can expect to explore in his latest series, Legends of the First Empire, which delves into the distant past of Royce and Hadrian’s world.

Admittedly, “The Death of Dulgath” was not my favorite tale of Riyria, but it also didn’t disappoint. If you’ve enjoyed the stories up to this point, you’ll enjoy this one. In the afterword, Sullivan expresses uncertainty about future tales of the duo, not wanting them to overstay their welcome as so many fantasy characters do. I, for one, believe they’ve got at least a few more tales in them.