Memory Lane: "The Guns of Avalon," by Roger Zelazny 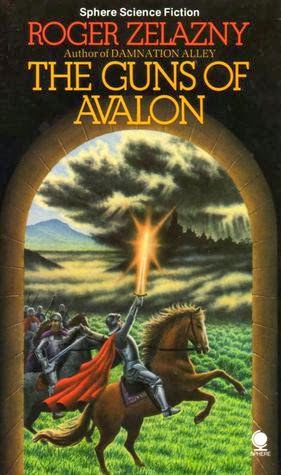 I began my second visit to Roger Zelazny's world of Amber with the intent to finish last year since the books are all fairly small, quick reads. Best laid plans and all that.

Finally, though, I cracked the cover on the second in the series, "The Guns of Avalon."

Prince Corwin of Amber has mostly recovered from his imprisonment at the hands of his brother Eric, and after his escape, his attention turns to revenge and reclaiming the throne, which he believes rightfully belongs to him. To do that, he must travel through shadow to Avalon, where he can get his hands on a secret that might allow him to do the previously unthinkable -- bring guns to Amber.

But more trouble is brewing in Amber than Corwin's escape and plot.


The thing that strikes me most in revisiting Zelazny's tales of Amber is just how unlikely it is that they would get published today -- at least not in this form. With each book checking in at only around 150 pages, they are a far cry from the sweeping, epic doorstoppers that you find on the fantasy shelves these days. They are no less fascinating or entertaining, though.

Zelazny doesn't waste words. There are no long passages of description, yet he always seems to paint a vivid picture of the strange worlds that Corwin travels through. The action in the books moves at around the speed of a bullet fired out of one of the guns that the prince wishes to bring back to his home, particularly compared to the often leisurely pace we see today. But Zelazny's economy of words is just as, if not more powerful than that of many current authors, and I always appreciate a writer who says what he means and gets to the heart of the story.

It's been many years since I first read "The Guns of Avalon," and while I remembered the story in broad strokes, there were quite a few details that I didn't remember. I believe that I enjoyed the story more the second time around, and I had a little bit better appreciation for the Arthurian angle. Though there's a touch of it in the first book, it's far more pronounced here.

Two books in, the Amber series holds up very well to those memories of my younger years.