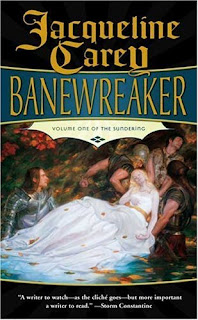 You might not recognize the characters and places in Jacqueline Carey’s “Banewreaker” ($7.99, Tor), but the story will be very familiar.

In essence, the book is a play on J.R.R. Tolkien’s “The Lord of the Rings,” with a twist. It’s told from the point of view of Satoris the Third Born, or Satoris the Sunderer to his enemies He is basically Carey’s version of Sauron. The world of Urulat has been divided by a war between the Shapers, the gods who formed the world and its inhabitants. The dispute stemmed from a disagreement between Satoris and Haomane, the First Born. Satoris, bearing a never-healing wound from the fight, has been exiled to Darkhaven, where he lives with his Fjelltroll and three immortal champions pulled from the world of men and Ellyl (elves). Now a star of omen has risen, signaling the fact that Haomane’s forces are on the move against Satoris.


You won’t find a direct link to Tolkien anywhere in “Banewreaker,” and the story does not follow strictly along with the classic. The archetypes, however, are certainly there. You have the human champion of a dwindling line and his Ellyl bride-to-be, the powerful wizard leading a quest to destroy the “evil” Satoris, an innocent character who is the best hope for defeating Satoris, and the list goes on. The parallels are plain. It’s obvious what Carey has attempted to do with this book, and, perhaps surprisingly, it works.

As with much of the epic fantasy genre, in Tolkien’s work there is no sympathy to be found for the villain. He is the ultimate embodiment of evil. In the real world, we know that things are rarely that black and white, and a little of that uncertainty is what Carey brings to epic fantasy. Satoris is certainly not without blame, and he has done some less than savory things, but equally as guilty in their feud is his prideful brother Haomane.

Retelling familiar tales from the viewpoint of the villain isn’t a new idea, but Carey’s tale succeeds where many fail in actually making the villain a sympathetic character. I just finished reading one of the more famous takes on the idea, Gregory Maguire’s “Wicked,” a few months ago, and at the end, I wasn’t sorry when the witch got doused with water and melted away. Though I don’t yet know how this story turns out (it concludes in a second volume, “Godslayer”), I hope that Haomane and the forces of “good” don’t come away with quite as clean a victory as in Tolkien’s tale.

“Banewreaker” may make readers reconsider some of the things that most fantasy fans take for granted. It may make you view even the most dastardly of villains in a different light and wonder if the white wizard is really quite so pure or the villain quite so black-hearted. Perhaps, just perhaps, there’s a good reason those bad guys turned out the way they did.