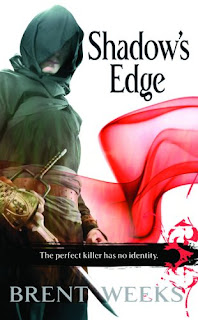 
It gets even more difficult when another former childhood friend, Jarl, now the leader of the Cenarian underworld organization known as the Sa’Kage, shows up with news that Logan Gyre, Kylar’s friend and the rightful ruler of Cenaria, is still alive, unbeknownst to the Godking, and surving in the worst prison that Cenaria has to offer. The events that follow may destroy his relationship with Elene and the idyllic existence that Kylar has hoped for.

I found the second volume of Weeks’ trilogy just as enthralling as the first. As with the first volume, the biggest strength in “Shadow’s Edge” is characterization. Often, in these books, you’re dealing with characters of rather nefarious backgrounds – thieves, prostitutes, and yes, cold-blooded killers – but Weeks still manages to make you feel deeply for them. So much so, in fact, that I found some scenes from this book quite difficult to read. To me, that’s the mark of a great story – when I’m drawn so much into the characters’ lives that the things that happen to them have an emotional impact on me. That’s certainly the case with Weeks.

Like its predecessor, “Shadow’s Edge” is dark and gritty, and it pulls no punches. It’s not a tale for the squeamish, but neither is it gratuitous. It uses what it needs to make an impact.

I can guarantee that it won’t take a year for me to get to the third book in the series.