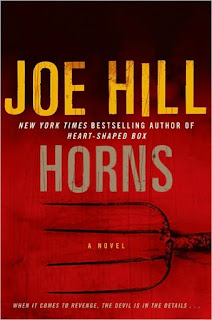 I was both impressed and inspired by Joe Hill’s debut novel, “Heart-Shaped Box,” a few years ago, so I’ve been looking forward to digging into his latest, “Horns” ($25.99, William Morrow) for a while now.

Ignatius “Ig” Perrish once had a promising future ahead of him. He’s part of a well-to-do and well-connected family, in love with the girl of his dreams and has plans to save the world. Those plans all come crashing down on the eve of his departure for a six-month stay in England. He has a public fight with his girlfriend, Merrin, and when she’s found dead the next day, the suspicion falls on him. Ig is innocent, but having spent the night sleeping it off in his car, he has no alibi. When evidence from the scene that could have cleared his name is destroyed in a lab fire, Ig can’t be convicted, but neither can he be absolved. Now everyone in his life thinks he’s a murderer/rapist who got away with his crime because of family connections.


Now, a year later, Ig has returned to the scene of the crime in a drunken rage and done “terrible things.” When he wakes the next morning, he finds he has horns growing from his head and the people he encounters begin to reveal intimate secrets about themselves. They seem to be asking his permission to fulfill their deepest darkest desires, and with a little concentration, Ig can influence their decisions, though he can’t make them do anything against their will. The most painful secret he’ll learn, though, and the one that haunts him most, is what actually happened on the night that Merrin died.

At its heart, “Horns” is actually a romantic tale, albeit a very twisted romance. Merrin was the person that made Ig what he was before her death, and also the only thing that saves even a shred of his humanity as the events of the book start to unfold. The love story here is tragic, but still touching. That said, it’s still a horror novel, so there’s plenty of creepiness and ickiness to satisfy fans of that genre, too.

As with “Heart-Shaped Box,” the true strength of “Horns” is Hill’s characterization. The inhabitants of this story are real, fallible people, and all carry their own secrets. Hill has the power to make the reader care for them, even though there’s a hint of darkness in even the most likeable. The structure of the story is, at times, awkward, jumping back and forth in time, but the characters hold your attention and keep you reading, waiting to see what secrets unfold next.

I didn’t enjoy “Horns” quite as much as “Heart-Shaped Box,” which is probably the creepiest, best horror story that I’ve read in a good 10 years, but it’s still a highly engaging story and keeps Hill at the top of my reading list. My only complaint is that he’s not as prolific as his dad. I could do with a new Joe Hill book every year, but then again, I’m very much willing to wait for quality.