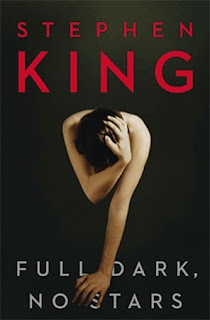 Outside of the concluding books of “The Dark Tower,” which I had waited years on, and the non-fiction “On Writing,” which I enjoyed, I haven’t picked up a Stephen King book in quite a few years. The last few efforts I read, prior to his accident, were disappointing and didn’t hold my attention. A week or so ago, though, a perfect storm led me to his latest collection, “Full Dark, No Stars” ($27.99, Scribner).

After enjoying the latest from King’s son, Joe Hill, I was in the mood for something creepy and disturbing. “Full Dark, No Stars” just happened to be waiting on my Nook and, not having any other new books that came close to what I was looking for, I decided to give it a shot. The collection contains four short tales (a point in its favor since many of the last King novels I read felt bloated and in bad need of an editor) that are, in fact, horrific and disturbing because of their very nature.


With the exception of “Fair Extension,” there is absolutely no supernatural presence in any of the stories, and even in that one, the fantastic is merely a device to move the story in the needed direction. Instead, these tales are often difficult to read simply because they’re stories of ordinary people. The motivators in the macabre tales in this collection are not ghosts or demons, but rather simple human falliblities: greed, jealousy, lust, vengeance, even the basic desire to protect your family and way of life. The stories are made more unsettling by the fact that they’re things that can and do happen everyday in the real world.

The weakest, and also the shortest, of the pieces here is “Fair Extension,” where a terminal cancer patient makes a deal to be rid of his disease. The catch is that he has to put the misfortune on someone else, in this case, his best friend since childhood. It plays on a theme from “Thinner” (to get rid of the disease, you have to give it to someone else) and seems a little rushed in execution. It doesn’t offer the same suspense and on the edge of your seat experience as the other three.

Opening tale, “1922” tells the story of a farmer whose wife hopes to sell some land she’s inherited next to the farm so a pork processing plant can be built there and so she can move to the city. To prevent that from happening, he decides to murder her and involves his teenage son in the plot. After the murder, his life falls into a downhill spiral that he can only imagine is his dead wife’s revenge.

The two most riveting pieces in the book, for me, though, were “Big Driver” and “A Good Marriage.”

In “Big Driver,” a mystery writer is sent on a short cut after a speaking engagement which leads her to a deserted gas station where she is raped and left for dead in a culvert by a giant of a man. She survives, but discovers that others haven’t. She also discovers that her misfortune was no accident, and rather than notifying the police as the person she was prior to the ordeal most certainly would have, this new woman sets out to settle the matter for herself.

In “A Good Marriage,” a woman discovers, quite by accident, that there’s a monster hiding inside of the seemingly perfect husband she’s been married to for nearly 30 years. She then must decide whether to go to the authorities and destroy her family or deal with the situation some other way.

These two novellas cost me a couple of hours of sleep, as I simply couldn’t put them down. Perhaps its because both featured a protagonist that readers can care for and get behind, something the other two stories in the collection lacked. Or perhaps it was because these are stories that also make the reader question himself. Particularly with “Big Driver,” there’s no denying what the “heroine” of the story is doing is wrong, and the danger for her is palpable. You may wish she’d just go to the authorities, but there’s also a bit of bloodlust that rises in the reader, hoping that she can carry through her plan. It reinforces the basic theme of the collection -- that ordinary people are, in many cases, capable of worse than most fictitious monsters.

The tales in “Full Dark, No Stars” aren’t groundbreaking or breathtakingly original. In most cases, they’re even fairly predictable. But the execution is fantastic, and in them, King accomplishes his stated goal in the afterword – a sense of honesty about the human condition and a collection of tales that make the reader think.