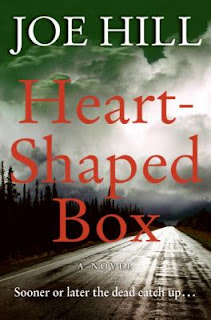 Joe Hill's lineage may be one of the worst-kept secrets in the publishing business. He's Stephen King's son, and if you couldn't figure that out from the author photo on the book jacket, you'd definitely get the idea after reading his debut "Heart-Shaped Box" ($24.95, William Morrow).


That's not to say that Hill's work is just a rip-off of his father. In fact, this book is quite a bit better than anything his father has done in years. It does, however, use some of the same techniques that are hallmarks of his dad. His characters are grounded, down to earth and very real, and he makes liberal use of pop culture references. In this case, it's almost as much fun picking out the rock 'n' roll references as reading the story.
When aging hard rocker Judas Coyne spots a ghost for sale on an online auction site, he can't resist adding it to the collection of bizarre and macabre items fans have given him over the years. There's just one catch, though. This particular ghost isn't the benign spirit the ad promised, but rather the spirit Craddock McDermott, stepfather of a former groupie of Jude's, Anna McDermott, known to him as "Florida." When confronted, Anna's sister tells Jude that after he cast her aside, Anna killed herself, and Craddock, a particularly talented hypnotist, has devised a way to make Jude pay.
Of course, as in real life, things are not quite that black and white as we find out in the twists and turns that take Coyne and his current lover "Georgia," real name Mary Beth, on a wild road trip with the ghost hot on their trail. The journey is not only a race with the devil, but a voyage of discovery that leads Jude back to his Louisiana childhood as Justin Cowzynski and opens his eyes to revelations about Anna, Mary Beth and himself.
It's understandable that Hill, real name Joseph Hillstrom King, didn't want to be saddled with his father's legacy and the expectations that go along with it, but he needn't have worried. Craddock is as creepy a character as you could ask for in a horror tale, and Hill manages to make the reader care deeply about Coyne, Georgia and Anna, despite their flaws. "Heart-Shaped Box" is an outstanding debut for a writer with a bright future.
Buy "Heart-Shaped Box."
Posted by Fred Phillips at 9:03 PM
Labels: Book reviews, Ghosts, Horror, Joe Hill, Stephen King