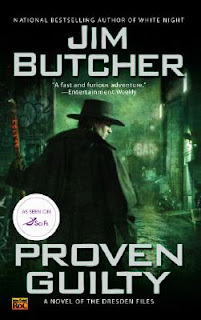 Editor's note: You'll see a few reviews like this pop up in my housecleaning over the coming weeks. When I posted my review of Jim Butcher's latest book "White Night," I stumbled across this review of his last book "Proven Guilty," which I had never posted to the old site. Some of the info is now dated, but the opinion on the book is the same. Enjoy.

Since discovering Butcher's wizard-for-hire Harry Dresden with 2001's "Fool Moon," the tales of the modern-day magician have consistently entertained me more than any other writer in the past five years. His latest, "Proven Guilty" (Roc), is no exception.

The secret war between the Red Court of vampires and the wizards' White Council is heating up, and Dresden, a newly named Warden, has been given a covert mission to find out why the Summer Court of the fey isn't aiding the wizards. But Harry's got bigger problems on his plate. He's fighting an inner battle against the fallen angel Lasciel, who is trying to tempt him to unleash her power. More pressing, he's just gotten a report of some big-time black magic going down in his hometown of Chicago.
When fans at a horror convention suddenly start becoming targets of the big-screen monsters they're celebrating, Harry is on the case. But when he discovers the source of that magic, it hits Harry close to home and may force him to further stretch his already strained relations with the White Council.

We're eight books into the Dresden Files now, and instead of running out of steam, the series seems to be getting stronger with each volume. With a two-hour Dresden Files pilot directed by Nicolas Cage set to air on the Sci-Fi Channel this summer, it's a safe bet we'll be seeing a lot more of Harry Dresden. (Editor's note: The series was delayed after I wrote this, and of course, has now aired its first season.) That sounds like good news to me.