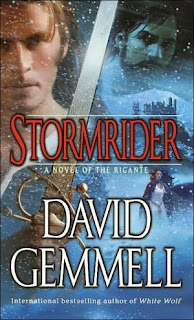 In his latest novel "Stormrider" (Del Rey), David Gemmell returns to a world that looks very much like the 17th Century of our own for what appears to be the final tale of the Black Rigante.

Several years have passed since the events of "Ravenheart," and life has returned to a semblance of normality for the Rigante. Kaelin Ring lives happily with his family in the highlands. The Moidart has taken up painting, of all things, and has turned his cruel attentions away from the highlanders. His son, the Stormrider Gaise Macon - now a general known as the Gray Ghost - has been called to the southern front by the king to help deal with a traitor's army.

That all changes when Winter Kay and his Redeemers recover the legendary Orb of Kranos, the skull of a Seidh god who wants to return to the world. Kay has been warned by the Wyrd that one with a golden eye will come for him. He takes that to mean Macon, who has one blue eye and one golden eye, a family trait.

To avoid the prophecy, Kay sets himself on a path to destroy Gaise Macon. That path may ultimately lead to the destruction of not only the Varlish and the Rigante, but all of humanity.

The tales of the Rigante have been some of the strongest stories of Gemmell's career - and that's saying something. With more than 25 novels in print, he has yet to disappoint.

The last novel "Ravenheart" left me wanting to walk the highlands with Jaim Grymauch just one more time, to experience the nobility of the Rigante clan again. This one is a much darker tale, lacking the moments of levity in "Ravenheart." Instead, "Stormrider" left me with a lot of questions about the future of a world at a turning point, and also questions of what might have happened if that turning point had gone differently in our own world.

Gemmell weaves his thoughts on mankind's destructiveness and the damage we've done to our world into the plot of "Stormrider." The Seidh god Cernunnos seeks to destroy the human race, because he's seen it destroy the magic of other worlds.

At the same time, Gemmell is not heavy-handed with the moral side of the tale. He never becomes preachy as some writers do when tackling real-world issues, but instead sheds a light of hope on the situation.

The rest of the tale is pure Gemmell. As always, his view of heroism is more realistic than many of his fantasy counterparts. He understands that great men - or women, for that matter - are made in the moment, and are usually not the glory-seekers of the world.

His heroes don't have adventure after adventure, but rather rise to the call of circumstance. It's a refreshing break from the near-immortal protagonists that flood fantasy fiction - and one of the things that manages to keep his work fresh book after book.