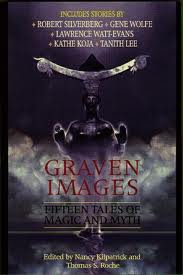 Since the beginning of time, people have made statues, carvings and other images to represent whatever gods held sway in their civilization. Many of these have been swept away by the tides of time and change, but some are still with us.

In "Graven Images: Fifteen Tales of Magic and Myth" (Ace), editors Nancy Kilpatrick and Thomas S. Roche pull together stories that deal with representations of deities of past and present. Beginning with ancient Greece, Egypt and India the stories progress chronologically through modern times.

The book brings together some established fantasy and horror writers like Robert Silverberg, Tanith Lee, Jack Ketchum, Esther Friesner and Lawrence Watt-Evans, with some lesser-known names like Lois Tilton, Kathe Koja and Kathryn Ptacek. Some stories stick entirely with the theme, while others hang on by a tenuous thread, making for an interesting variety.

One of the best stories in the book has little, if anything at all, to do with deities. Lawrence Watt-Evans' "Heart of Stone" tells the story of a woman trapped in a wall of a wizard's home. When the wizard is killed by superstitious townspeople, she spends a great deal of time alone, before a con artist happens upon the ruins of the house and tries to use her for his own gain. He soon finds that the townspeople he's trying to fleece still harbor their ill will toward magic and its practitioners.

There are a number of other very intriguing tales in the collection. Lois Tilton's "The Goddess Danced" tells the tale of a young girl horribly scarred by an attack from a local bully and cast off by her family to the only people that will take her -- a family of beggars. After years of abuse from her husband's family, the girl develops a bond with the goddess Kali.

In "Shaped Stones" by Nina Kiriki Hoffman, a family of orphans in the Great Depression is taken in by a wealthy magician who has designs for one of the orphans who possesses a magical gift. "Mud" becomes a mortal enemy in Brian McNaughton's World War I tale. And in Chelsea Quinn Yarbro's "Giotto's Window," a man begins to see monstrous visions of other people and his doctor is not sure he's insane.

The only low point of the book comes from veteran Gene Wolfe. His "The Eleventh City" has an intriguing idea based on a story from the fifth chapter of Mark, but it's written as a memo between a university researcher and his superior. Unfortunately it also reads like a memo, with no emotion and nothing to hook the reader.

The other 14 tales in the book more than make up for the one slow point near the middle. The book ends with a bang as three powerful tales are stacked up back-to-back. Jack Ketchum and Edward Lee's disturbing "Masks" plumbs the darker side of human nature, and what some are capable of when their faces are hidden. Kathe Koja's "At Eventide" looks at a woman given an incredible power and an opportunity to repay the attacker that gave her this "gift." Finally, Tanith Lee's "That Glisters Is" offers a dream-like view of "the other side."

In the introduction, the editors set some lofty goals for the book. They promise tales that will offer some insight into spirituality. Many of the tales in the book succeed in doing that. What the editors have truly succeeded at, though, is bringing together a collection of interesting and intriguing tales that take a look at the past, and in a few cases, perhaps even the future.