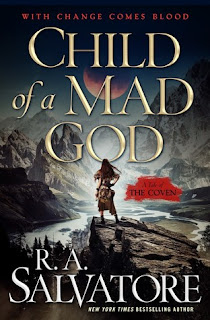 
Aoleyn is a member of the Usgar, a violent tribe that lives atop Fireach Speuer and are seen as demons by the villages that surround the lake below the mountain, which they often raid for supplies and slaves. It is a brutally patriarchal society, and even at a young age, Aoleyn chafes against that. The girl has great promise with the crystal magic that the women of the tribe possess, but a fiery spirit that often gets her in trouble.

The men of the tribe return from one of their raids with a pregnant slave, Innevah, who eventually gives birth to the boy who will completely open Aoleyn’s eyes to the wrongness of her tribe’s customs.

As Aoleyn grows, there’s a parallel tale taking place in the lake villages around a trader known as Talmadge. A loner, he’s perhaps the only outsider accepted by the tribes and trades his wares for pearls that bring a good price outside the remote place. He also has a deep love and respect for the people and wilderness around the lake, even though it’s brought him tragedy.

While Talmadge’s tale is, at times, gripping, I never really connect with him the way that I do with Aoleyn, and there are many times when we’re traveling with him that I’m wondering what’s going on back on Fireach Speuer.

Though I actually share many of Talmadge’s introvert traits and would seem to identify with him more, it’s Aoleyn that fascinates me. With her, Salvatore has created another likeable character that you want to succeed. You root for her, care for her and worry when she’s doing things that you know are going to bring her serious trouble, even as you cheer her on for doing them.

Probably in every review of a Salvatore book I’ve ever written, I’ve talked about his skill with combat scenes. There’s certainly a little of that here, but it’s dialed back from a Drizzt tale. In “Child of a Mad God,” he shows off a different and more important skill – the ability to develop a character that readers connect with deeply and tell a tale on a more human level.

Some people are probably reading this review, thinking, “young girl battles against a patriarchal society. He’s pushing an agenda here.” I’m no fan of politics in anything these days, and perhaps there is a bit of reflection on the current world in Salvatore’s tale. But it’s done with a light and deft hand, not with the preachy tone that some people tackle it with. His dalliances with the message are designed to make you think rather than to tell you what to think.

Overall, I leave “Child of a Mad God” impressed and more interested in Salvatore’s next book than I have been in a while. It’s hard to put my finger on, but there’s a different tone and tenor here than in any of his previous books that I’ve read, and I like it.

Hmm, interesting to hear. I was a huge fan of Drizzt as well, but never really got into Salvatore's non-Forgotten Realms work. The last book I read/reviewed of his was The Companions, and it was an horrible attempt to undo everything he'd written before and reboot The Crystal Shard.

I've been curious about this, but was waiting to see how other people took it before deciding whether to give it a read.

I enjoyed it. it was a bit slow to start for me, but I really got into Aoleyn's story.

The problem with Drizzt these days, to me, is that I think heroes have a certain shelf life. Some may be longer than others, but there's a limit to the adventures that one hero can have in a lifetime. When you get to 30 or 35 books about the same guy, it's going to get stale and repetitive. I think it was either "The Thousand Orcs" or "The Lone Drow" where I finished the book and had never really been into it, and I haven't picked one up since. I have fond memories of those early books, though, and I think the second trilogy still holds up very well.