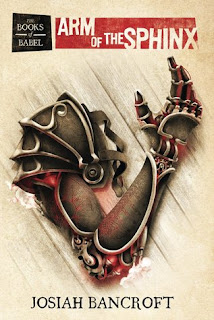 I had a lot going on in the latter quarter of the year that led me to slack off a bit in my reading, but it was still a pretty good year.

It was a year of discovering new voices for me. At least three quarters of the books that I read were by authors that I had not read before – some brand new, and at least one a classic author that I’d never given a shot. A few of my favorites also delivered solid additions to my library, and I took a few trips down memory lane, as well.

As I do every year, I want to make it clear that this list is in no way a “best of.” I simply don’t get to read enough books to qualify me to say what was the best of the year. These are just my favorite reads of 2017 (some of which are not from 2017). They also are in no particular order, though I’ll admit the first few are definitely my favorites.


“Arm of the Sphinx” by Josiah Bancroft. Published February 1. This is one of the more inventive series I’ve encountered in recent years. The second book in the tale of the Tower of Babel takes a slightly different approach from its predecessor “Senlin Ascends.” Where that was whimsical and offbeat, this one is more of an adventure tale, although there’s still plenty of the other two elements, too. Bancroft has recently been signed to Orbit Books, which will be releasing the first two volumes soon to a deserved wider audience. I just hope it doesn’t delay the third part of the story.

“Red Sister” by Mark Lawrence. Published August 9. Lawrence has been a favorite on this list nearly every year. After a couple of series in the world of his Broken Empire, Lawrence takes us to a fascinating new world where the poles are capped in ice, and only a small and shrinking strip of inhabitable land exists around the equator. The story focuses on a young girl, Nona, condemned to die, who is stolen from the gallows by a sect of warrior nuns. As with all of Lawrence’s lead characters, she’s fascinating and may just end up being his best. Though the book is a somber affair, lacking much of the humor of his previous efforts, it’s also deeper and even more compelling.

“Mort” by Terry Pratchett. Published July 20. From a somber book to one that’s anything but. I only managed one installment in my Memory Lane re-read of Pratchett’s works this year, but it’s also one of my favorites. “Mort” is the book that made Death one of Pratchett’s best characters. It holds up well and remains one of the funniest books in the series for me.

“Sins of Empire” by Brian McClellan. Published July 3. The world has moved on from McClellan’s Powder Mage Trilogy, and the beginning of his second series focuses on three characters who had more minor roles in the first trilogy. The first book proves just as compelling, though, with fantastic visceral battle scenes and great characters.

“The Grey Bastards” by Jonathan French. Published May 15. When I started reading “The Grey Bastards” it was a finalist in the Self-Published Fantasy Blog Off. By the time I finished it was the deserving winner. French plays with the tropes of classic fantasy, making us care deeply about a group of creatures that are usually presented in fantasy as black-hearted villain fodder for the evil overlord.

“The Forgotten Beasts of Eld” by Patricia McKillip. Published July 12. July was a pretty good reading month for me, as all three of my reviews made the list of faves. Patricia McKillip is, obviously, a well-respected name in the fantasy genre, but I had not read her before. I really enjoyed the concise, yet lyrical storytelling that McKillip employs here. There are no wasted words, and the story is stronger for it.

“Faithless” by Graham Austin-King. Published August 23. Normally I wait until the finalists for the Self-Published Fantasy Blog Off are named before I dive in, but there was something about Graham Austin-King’s entry that grabbed my attention. This story was dark and uncomfortable with an interesting story structure that I quite enjoyed. Sadly, it didn’t make the finals of the contest, but it made my favorite books. That’s something, right?

“Kings of the Wyld” by Nicholas Eames. Published December 1. A reluctant over-the-hill hero comes out of retirement to save the world. Familiar story. The way that Eames tells it? Not so familiar at all. This tale was equal parts grimdark and “Spinal Tap,” and I enjoyed every bit of it. Almost as fun as the story is picking out the rock ‘n’ roll references.

“Son of the Black Sword” by Larry Corriea. Published May 2. As a fan of Correia’s Monster Hunter series, I found this quite different but still very enjoyable. This series is darker, more serious and without the humor of Monster Hunter, but it’s also a timely story for our current sharply-divided world.

“The Death of Dulgath” by Michael J. Sullivan. Published April 11. The end notes of this book made it sound like it might be the last tale of Riyria, but happily I've discovered that there's a new one. Admittedly "The Death of Dulgath" was not my favorite of the series, but any road trip with Royce and Hadrian is always fun. Here’s hoping that Sullivan finds at least a few more good tales about the duo.