Review: "They Mostly Come Out at Night" by Benedict Patrick 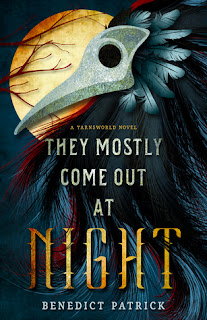 With “They Mostly Come Out at Night” ($3.99 ebook, $8.99 paperback), Benedict Patrick gives us something of a fairy tale that’s more than just a bit Grimm.

Lonan lives as an outcast, blamed for a long-ago incident that was not his fault. His village is terrorized by creatures known as the Wolves, who come in the night. As a result, every home has a basement with a sturdy door and every family is locked behind those doors when darkness falls. The night in question, Lonan shouted to try to warn people about the real culprit, but it was his shouts that were blamed for the violence that took the lives of several villagers, including his father, and severely scarred the love of his life.

He’s not only shunned because of that incident, but because he is Knackless, never having found his gift in life. Now an adult, Lonan is barely tolerated in the village, and only welcomed by a few – his younger sister, the healer Mother Ogma and her invalid house guest.

Then, he begins to have strange dreams, ones that seem to give him a glimpse into the life of the Magpie King, the mysterious protector of the Corvae people. The dreams convince him that the famed hero once again roams the night, fighting the Wolves and making it safe to walk under the stars again. Those dreams, though, may turn into a nightmare.

“They Mostly Come Out at Night” is an interesting read because it’s a meandering sort of tale that still manages to be an action-packed story. We spend a lot of time learning about Lonan and his troubles without really knowing what’s going on. Patrick keeps our interest up, but rolls out the details slowly with a few surprises along the way.

The structure is a bit unconventional as we follow several different tracks – the story of Lonan, the story of the Magpie King told through his dreams and the lore and stories of the Corvae people that Patrick doles out from time to time in the midst of his tale. These are mostly focused on the Magpie King and his arch-enemy Artemis, and Patrick does an excellent job of weaving them into the current storyline of Lonan. He delves deeply into folklore, fairy tales and legend for all three tracks, turning them to best suit the tale.

Given that the name of the series is Yarnsworld, I suspect that this theme will continue in future volumes, and I welcome it. The stories within the story provide some nice depth, and it’s fun trying to figure out the basis for those legends.

Though I broadly categorize “They Mostly Come Out at Night” in fairy tale territory, it is more on the original Brothers Grimm side of that genre, not the Disneytized side. The tale is dark, sometimes disturbing, and you just know there won’t be happy endings for everyone. Of course, that’s just how I like my fairy tales.

I love walking away from a book thinking that it’s not quite like anything else I’ve read before. Certainly the elements are not unfamiliar, but Patrick puts them together with a unique flair. I look forward to exploring the Yarnsworld as he goes forward to see what other tales it holds.