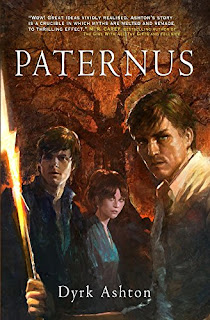 Why just play with one mythology, when you can play with them all? That’s the way Dyrk Ashton sees it in “Paternus,” a finalist in this year’s Self Published Fantasy Blog Off.

Fiona Patterson lives with her Uncle Edgar, an eccentric but kind man, and has a relatively normal teenage life. She has insecurities and love-life problems. She works as an intern at a local senior care center, where she seems to be the only person who can get through to an invalid named Peter. She’s managed to determine that he likes flowers and figs, and she’s been the only person at the facility able to get a smile out of him.

When she’s confronted by a menacing beggar in a freak rainstorm on her way to work one morning, she thinks it’s strange, but she has no idea just how strange things are about to get for her. She’s about to learn that nothing around her is what it seems.

Ashton grabbed my attention pretty quickly by introducing us to a bevy of incredible manifestations of ancient gods. I was drawn in, trying to figure out who all of the players were and how it was all going to come together.

After that initial fascination, though, “Paternus” requires some patience in the early going. There’s a lot of information that Ashton has to share with the reader to set up what’s about to happen, and a couple of times I did feel like the book was getting a little lost in the history lesson while I was ready to see everything that it was leading up to begin to come together.

Once business begins to pick up, though, the action flies fast and furious. Let’s just say that the events of “Paternus” are one absolutely full day for Fi and her friends. By the end of that day, her world is shattered, and everyone else’s may be as well.

Now, back to that whole mythology thing. We all know that certain themes and types of characters come up often through different mythologies if the world, and Ashton plays on that for an intriguing take on the gods. What if they’re all the same beings, changing aspects through time to fit the world and their surroundings? Ashton gives us a ton of information on them, but leaves just as many mysteries to be answered in future volumes.

Ashton has a very comfortable style and great wit. I like that he’s able to inject some humor into even the darkest and most dire of circumstances and make it fit well rather than coming off as forced comic relief.

“Paternus” is another great read that continues to challenge my perceptions of self-publishing. My only regret at the end of the book is that I can’t continue the journey with Fi immediately.